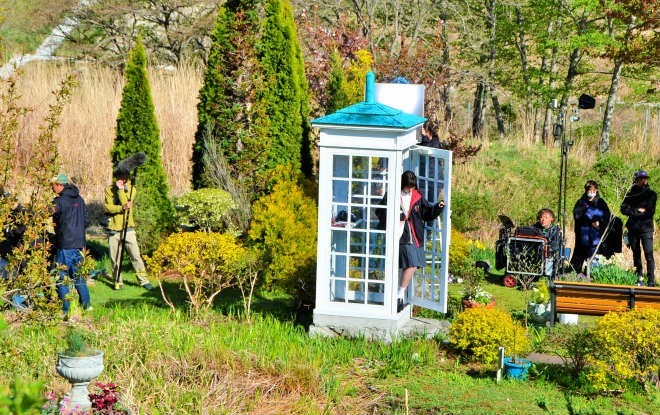 Film crew prepare a scene for “Kaze no Denwa” in the Namiita district of Otsuchi, Iwate Prefecture, on May 2. (Masakazu Higashino)

KAMAISHI, Iwate Prefecture--Shooting has wrapped up for a film about a phone booth in Otsuchi, Iwate Prefecture, that has allowed thousands of people to “call” loved ones who were killed in the 2011 disaster.

Dubbed “Kaze no Denwa” (phone of the wind), the booth with a disconnected black telephone was set up after the Great East Japan Earthquake and tsunami devastated the Tohoku region on March 11, 2011.

An estimated 10,000 people poured out their emotions in the phone booth in the three years after it was built.

“There is a tendency in modern society to place importance on values that can be seen with their eyes,” director Nobuhiro Suwa, 58, said. “I want many people to learn about ‘prayers’ infused in the Kaze no Denwa, which receives feelings that cannot be sorted out.”

The protagonist of the film, also titled “Kaze no Denwa,” is a 16-year-old girl named Haru, whose parents and younger brother were killed in the earthquake and tsunami.

Tormented by being the only family member who survived the disaster, Haru heads for her hometown of Otsuchi from her aunt’s home in Hiroshima.

“Haru reflects on herself during the journey, which is an extraordinary situation,” the director said. “Wars and disasters are the same in the sense that people are robbed of their loved ones. How do people recover after they are left alive and traumatized? I wanted to tell that story in a more universal way.”

Filming began in an area in Hiroshima Prefecture hit hard by the torrential rain that swamped western Japan last year. Shooting moved to the Tokyo metropolitan area and ended in Otsuchi on May 2.

“There are places in disaster-stricken areas where it looks like time has stood still, but people in Tokyo wouldn’t know it when they are so excited about the Olympics,” Suwa added.

Serena Motola, 20, plays the role of Haru, while veteran actors, including Hidetoshi Nishijima, Toshiyuki Nishida and Tomokazu Miura, fill in the supporting roles.

The movie is expected to open after the turn of 2020.

(This article was written by Masakazu Higashino, a senior staff writer, and Hajime Watanabe.)