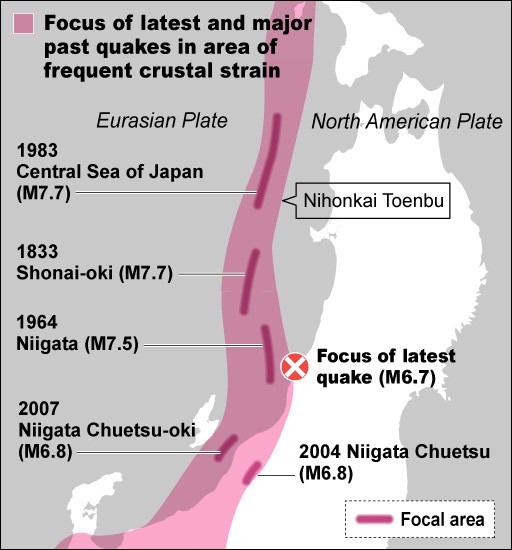 The focus of the June 18 earthquake that hit northern Japan lies in an area that has spawned many major temblors in the past and could possibly generate additional ones in the near future.

The area serves as a boundary between the North American Plate, on which lies Hokkaido and the Tohoku region, and the Eurasian Plate to the west, according to Takuya Nishimura, an associate professor of geodesy at Kyoto University's Disaster Prevention Research Institute.

The boundary extends from off the west coast of Hokkaido to an area around Sado Island in Niigata Prefecture.

The frequent collisions between the Eurasian and North American plates generate crustal strain and deformations that can trigger seismic events, he said.

The crustal strain in the area is different from the Nankai Trough, where the Philippine Plate subducts beneath the Eurasian Plate off the southern shores of Japan.

A number of earthquakes with magnitudes of around 7 have occurred in the region of the latest quake, including the 1964 magnitude-7.5 Niigata earthquake, the 1983 magnitude-7.7 earthquake in the central part of the Sea of Japan, and the 2007 magnitude-6.8 Niigata Chuetsu-oki Earthquake.

The 2004 Niigata Chuetsu Earthquake, with a magnitude of 6.8, also occurred in the vicinity of the latest focus.

The Headquarters for Earthquake Research Promotion has targeted the Nihonkai Toenbu area, which covers the overall region of crustal strain, for a long-term evaluation to assess the possibility of a major quake hitting over the next 30 years.

Officials of the Japan Meteorological Agency explained at a news conference held after midnight on June 18 that the latest temblor was a reverse fault-type earthquake caused by the two plates pushing together from both east and west.

The Niigata earthquake and the one in the central part of the Sea of Japan were also reverse fault-type earthquakes.

Nishimura warned of the possibility that earthquakes of similar intensity could occur in the near future, much like the series of temblors of at least upper 6 in the Japanese intensity scale of 7 that struck after the Niigata Chuetsu Earthquake.

(This article was written by Norihiko Kuwabara and Maiko Kobayashi.)