Shibuya braces for image change with new centers on the horizon 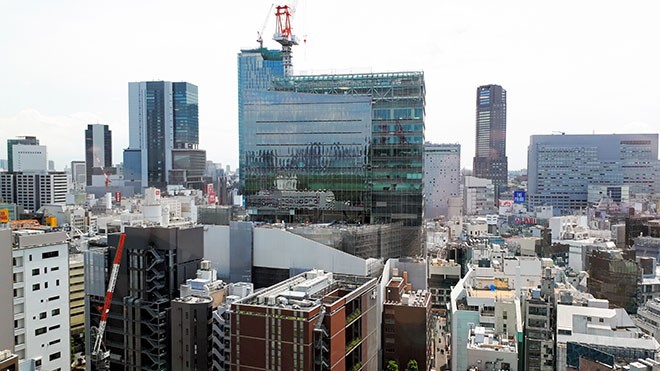 Tokyo's Shibuya district image as a youth haven with its iconic scramble crossing and Hachiko statue in front of JR Shibuya Station will get a makeover starting in November.

The new Shibuya Parco and Shibuya Scramble Square are scheduled to make their debut, which are aimed at transforming Shibuya into a draw for people of all ages.

Shibuya Parco, which halted operations about three years ago, and the new Shibuya Scramble Square, connected directly to Shibuya Station, are targeting middle-aged and older adults, in addition to young people.

Along with the opening, many of the massive construction cranes and scaffolding that have dotted the skyline in the district in recent years will finally be gone.

On June 18, Parco Co. announced that the Shibuya Parco department store will have 19 stories above ground and three basement floors when it reopens in November. Sales floors will be located from B1 to the ninth floor, including part of the 10th floor, featuring a total floor space of 42,000 square meters and about 180 shops centering on fashion outlets and restaurants.

Parco hopes to attract fashion-conscious shoppers of all ages and nationalities and both sexes, by offering a wide range of fashion genres including the Italian fashion house Gucci, fashion designer Issey Miyake and Victorian-inspired Lolita fashion.

The goal for annual sales of all tenants is about 20 billion yen ($184 million).

Shibuya Parco which opened in 1973, had operated under a two-tower system with Parco Part 1 and Part 3 since 2011, as Parco 2 closed in 2007. The two towers were closed due to the aging of the buildings, and are being rebuilt at a cost of more than 20 billion yen, to combine them into one tower building.

Shibuya’s other building reshaping the landscape will be Shibuya Scramble Square’s east tower, one of the new developments by the Tokyu Corp Group. The 47-story tower will stand about 230 meters tall, the highest building in Shibuya. The building will feature an observation facility offering high-up views of the station area and the scramble crossing far below.

Commercial facilities will be located between the B2 level and 14th floor.

Shibuya Fukuras, operated by Tokyu Land Corp., will open in December adjacent to Shibuya Station where the former Tokyu Plaza shopping complex stood. It will target adults along with young people by offering a wealth of international cuisine restaurants.

All the new buildings will include office space. In Shibuya, demand for offices centering on information technology companies or start-up firms has been increasing.

In the rebuilding project, Tokyu Group plans to develop new office space of about 270,000 square meters, equivalent to about six Tokyo Domes. Office space is quickly snapped up when it starts soliciting tenants, according to the group.

Rebuilding has continued at Shibuya Station itself and around the station. The transformation, taking about 15 years, will end in fiscal 2027 when the central and west towers of Shibuya Scramble Square will be completed.

Shibuya Station in recent years has become known as a pass-through station with the start in March 2013 of direct train service through the connecting of Tokyu Corp.’s Tokyu Toyoko Line and Tokyo Metro Co.’s Fukutoshin Line.

JR Shinagawa Station exceeded the average number of passengers a day at Shibuya Station in fiscal 2016, leading to concerns of Shibuya's lowered status as a terminal.

However, the opening of the new trendy shopping and office centers could mean the light will soon be shining again on Shibuya.