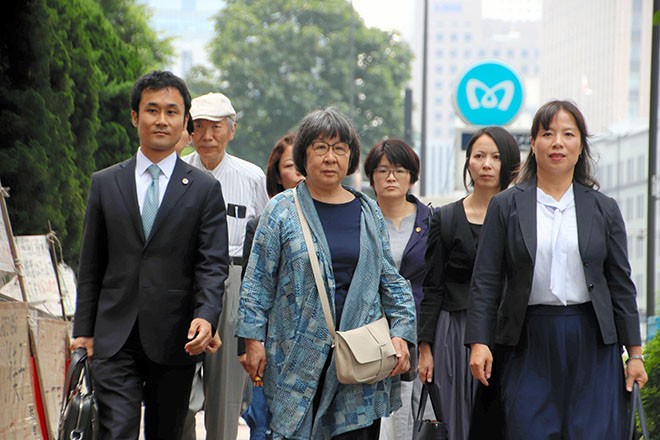 A defense team for plaintiffs heads to the Tokyo District Court to file a suit against Juntendo University on June 20. (Tomoko Yamashita)

Thirteen female plaintiffs who failed the "rigged exams" of the medical school of Juntendo University between fiscal 2011 and fiscal 2018 filed a damages suit against the university on June 20.

In the suit, filed with the Tokyo District Court, they are seeking a combined 42.7 million yen ($398,000) for “being discriminated against based on gender.”

According to the defense team opposing discrimination against women in medical school exams, the plaintiffs are women in their teens and 20s residing in Tokyo and four other prefectures.

The medical school of Juntendo University was found last year to have set up different criteria for passage of its exams based on gender and has handled female applicants unfairly.

In the lawsuit, the plaintiffs said that they failed the rigged exam and called for compensation for their pain and suffering of 2 million yen for one fiscal year per person, and the payment of exam fees and other related expenses including hotel fees.

In the medical school exams of Juntendo University between fiscal 2013 and fiscal 2018, male applicants had a higher passing rate than female applicants. But in fiscal 2019, after the scandal came to light, women applicants topped the men. The independent commission established by the university submitted an emergency preliminary report last December, which admitted the exams in fiscal 2017 and fiscal 2018 were rigged. It speculated that the practice may have been occurring even before then.

It planned to investigate the exam results of fiscal 2016 and prior years and the causes, saying “we will submit the final report later on.” But the report has not yet been released.

The plaintiffs will also try to raise the issue in court and demand that the university respond to questions on whether the third-party panel is working on a report and the timetable for its release.

"It (Juntendo University) is responding too slowly," plaintiff attorney Arata Yamazaki said at a news conference on June 20. "It is also doubtful that it is continuing the investigation."

Regarding the independent commission's investigation, the university didn’t respond to a request from The Asahi Shimbun seeking comment. On the lawsuit, it said that it will refrain from commenting because it has not received the lawsuit yet.

(This article was written by Azusa Mishima and Tomoko Yamashita.)