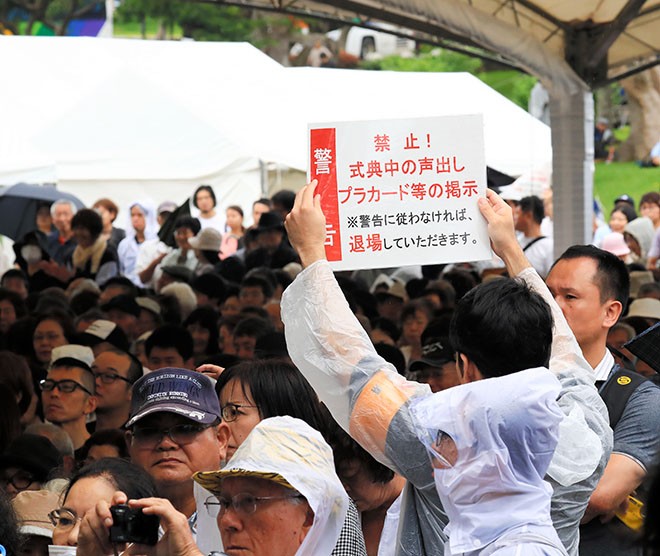 An official holds up a sign warning that hecklers will be asked to leave the memorial service for the war dead during the Battle of Okinawa in Itoman, Okinawa Prefecture, on June 23. (Kazutaka Eguchi)

ITOMAN, Okinawa Prefecture--Standing on the hill where the last fighting occurred during the Battle of Okinawa in 1945, Okinawa Governor Denny Tamaki on June 23 vowed to work toward a world of "everlasting peace."

Tamaki also sternly criticized the central government’s forced construction of a U.S. base in the prefecture, with Prime Minister Shinzo Abe in the front row at the memorial service here.

The governor read out a peace declaration for the victims of the Battle of Okinawa on the 74th anniversary of the final day of the bloody ground fighting in which one in four Okinawans died.

“We must pass down Okinawa’s warm heart we call ‘Chimugukuru’ and its spirit of peace, inherited from our ancestors, to our children and grandchildren,” Tamaki said in his speech delivered in Japanese and sprinkled with English as well as the Okinawan language Uchinaaguchi.

This year’s memorial service came amid increasingly strained relations between Tamaki and Abe.

The central government has pushed forward with the relocation of U.S. Marine Corps Air Station Futenma in the prefecture and began land reclamation work off the Henoko district in Nago to build a new base in December.

Tamaki touched on the massive “No” vote in a referendum on the issue in February in the peace declaration addressed to about 5,100 attendees of the memorial service.

“The central government has ignored public opinion and treated local autonomy like a piece of dirt,” Tamaki said. “With all our strength and all our hearts, we will work to create a peaceful society that is filled with all-inclusive diversity and tolerance and protect every person’s dignity."

Abe took the stage as a guest speaker after Tamaki.

“People in Okinawa have been shouldering a heavy burden that comes with the concentration of U.S. military bases,” Abe said.

“I am determined to deliver results to reduce the burden,” added Abe, who did not mention Henoko in his speech.

Many in the audience jeered Abe while he delivered the speech.