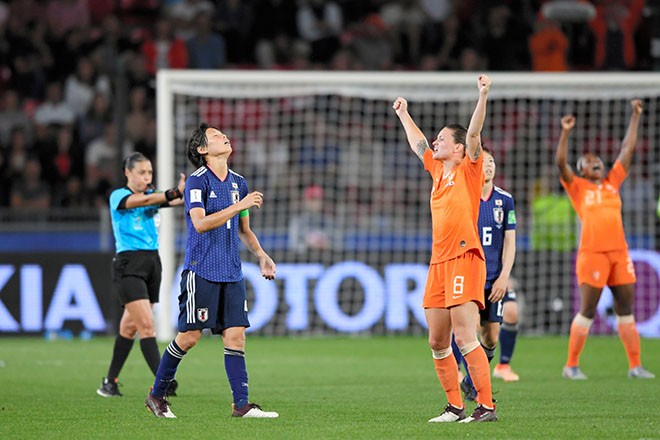 The referee's decision to award the Netherlands a late penalty against Japan in Tuesday's women's World Cup last-16 match was one of many "cruel decisions" made by video-assisted referees (VAR) during the tournament, Japanese coach Asako Takakura said after the side lost 2-1.

At 1-1 in the 90th minute, Vivianne Miedema's shot was blocked by Japan skipper Saki Kumagai at point blank range and VAR confirmed the referee's decision to award a penalty for handball, which commentators deemed to be a very harsh decision.

VAR has been in the spotlight at the women's World Cup with many goals and offside calls being overturned after review, leading to player protests and criticism from managers, but Takakura said she could not complain.

"We created a crisis for ourselves," Takakura told reporters when asked about the penalty decision. "With VAR, sometimes cruel decisions have been made watching other matches.

"It happened to us too towards the end of the match. I'm sorry it happened, but we have to look forward and we must accept the decision."

Although Japan had their chances at the tournament, their physicality and intensity were not up to the mark compared to the European sides such as the Dutch and England, who beat them 2-0 in the group stages.

"We've been conscious about the physical size as we're not as tall or as strong as European players," she said.

"Individually, it's obvious that we don't have as much power as them and we have put all the effort we could in the intense duels in the competition. There is room for improvement and we must continue to improve our skills and physical levels."

Takakura said Japan, who won the title in 2011 and also reached the final at the previous edition, were under pressure to perform which may have affected the squad that included 17 players who were playing in the World Cup for the first time.

"We are a young squad but when you're on the pitch, age doesn't matter," Takakura added. "We were runners-up last time (2015) and winners in 2011. We were happy that a lot was expected from us but it was also a lot of pressure.

"We came here determined to play seven games. Some of the players' form did not improve during the tournament and some were injured.

"So those unexpected things happened and must be taken into consideration. Probably I didn't do well enough for the players."