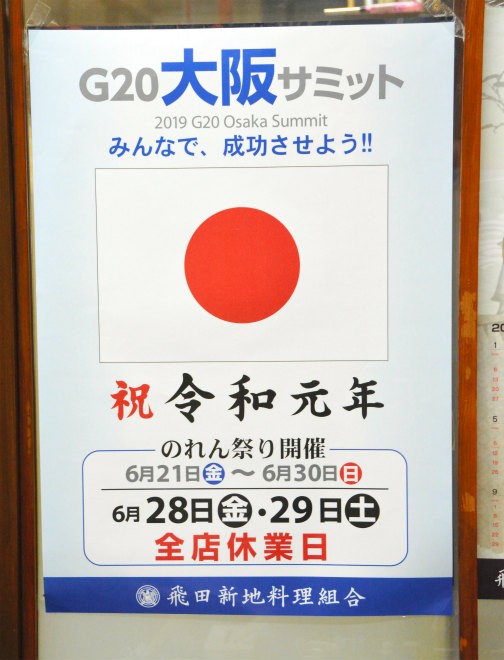 A poster says businesses will be temporarily closed in Tobitashinchi, Osaka’s historic red-light district, on June 29 and June 30 due to the G-20 summit. (Tomoya Nozaki)

OSAKA--High-profile international events often provide big business for the seedier sections of the host city. But in Osaka’s Tobitashinchi red-light district, potential patrons seeking sex-related services will likely find white curtains instead of nubile flesh during the Group of 20 summit.

Osaka’s sex and gambling industries are voluntarily refraining from luring customers to their dens of sin when world leaders and their delegations descend on the city for the June 28-29 summit.

All 159 businesses affiliated with the Tobitashinchi Ryori Kumiai cooperative association will suspend operations for the two days.

On street corners in the district, posters have been placed that read, “Temporarily closing on June 28 and June 29 due to the 2019 G20 Osaka Summit.” The posters carry a slogan: “Let’s make it successful together.”

On any given night, men in business suits and tourists flock to Tobitashinchi’s narrow streets that are lined with sex-trade shops. They can peek through “show windows” to browse the women available to satisfy their carnal desires.

But now, the storefronts of these sex shops are covered with white curtains made specifically for the G-20 occasion.

The last time such an association-wide voluntary suspension of business was imposed in Tobitashinchi was when Emperor Hirohito died in 1989 and became posthumously known as Emperor Showa.

The association said it did not receive an order from the central government, municipal offices or police to take such action. Members said they made the decision voluntarily in November 2018 to “avoid confusion and maintain order.”

“We cannot cause any unexpected chaos and trouble the police,” a member said in arguing for need of self-control, according to the association.

A board member of the association explained the purpose behind the temporary suspension of business operations.

“Many people will come to Osaka from abroad for the summit,” the board member said. “We want to ‘dress up’ Tobitashinchi properly so that they will see the orderly streetscape.”

The association has held a “Noren matsuri” (curtain festival), which started on June 21 and will end on June 30.

Association members are also patrolling the streets to maintain order, and a private security company will be hired for the task on June 28 and June 29.

Osaka prefectural police, with backup from police from around Japan, will deploy 32,000 officers for security during the G-20 summit, the first one hosted by Japan. That number will exceed the deployment level for the 2016 Ise-Shima G-7 summit.

World leaders are expected to stay at hotels scattered across the Osaka city center and traverse to and from the summit’s main venue in the waterfront area, forcing police to cover a wide area.

Police will enforce large-scale traffic controls from early on June 27 until June 30, including the closing of the Hanshin Expressway in the city center except for the few hours between midnight and dawn.

Other businesses have joined Tobitashinchi in imposing self-restricted bans on gimmicks normally used to attract customers.

Pachinko (Japanese pinball machine) parlors affiliated with Osakafu Yugigyo Kyodokumiai (Osaka prefectural pachinko and pachislot cooperative association) have decided not to replace their pinball machines with new ones during the month of June.

The replacement practice, called “shindai irekae,” is a commonly used marketing gimmick because players believe they have a higher chance of winning cash and prizes with the new machines.

“Osaka prefectural police have been on duty that requires their largest-ever security measures and activities, so we decided to voluntarily restrain from (shindai irekae),” the association decided at a board meeting in March.

When a pachinko parlor changes machines, several police officers are required to check the process to ensure the machines are the specific ones listed in the parlor’s application.

According to the association, its 642 affiliated parlors own 265,000 pachinko and pachislot machines. Many parlors replace their machines every month.

“It would have increased the strain on the police,” said Hideki Nagano, head of the secretariat of the pachinko association. “We want to work cooperatively with the police as much as possible so that the G-20 summit in Osaka will be successful.”

The association adopted similar self-imposed restraints for past summits held in Ise-Shima in Mie Prefecture and Toyako in Hokkaido, as well as during the 2002 World Cup that Japan co-hosted with South Korea.

IN RETURN FOR FAVOR

Other businesses in pleasure quarters may follow Osaka’s lead for the 2020 Tokyo Olympics and Paralympics.

According to a nationwide association of “soapland” brothels, some members in Tokyo, Kobe and Fukuoka are considering closing voluntarily during the quadrennial event to avoid becoming a burden for police if trouble occurs.

Businesses in Tobitashinchi, pachinko parlors and soaplands are all subject to the Law Regulating Adult Entertainment Businesses under the jurisdiction of the National Police Agency.

According to an Osaka city-published history book and other documents, the Tobitashinchi licensed quarter was established in 1918, and prostitution flourished in the area.

However, brothels were forced to change course or close down in 1958 with the full enforcement of the Anti-Prostitution Law.

Since then, many businesses have continued to offer sex-related services but registered under the business category of “ryotei,” or fancy traditional Japanese-style restaurants. This enabled them to legally operate an entertainment business prescribed in Article 2, Paragraph 1, Item 1 of the law.

They are also required to notify local public safety committees of their business intentions and obtain permission.

Yoshikazu Nagai, a sociologist and professor at Kansai University who specializes in the law, said the voluntary restraint from these businesses for the G-20 summit may not be so chivalrous.

These businesses operate in a gray zone of the law, and they may be providing a favor to police in exchange for not cracking down on their operations in the future.

“Police will be understaffed for events like the G-20 summit and the Olympics. These business owners, who have had a long relationship with police, may have read the situation and are now giving a great service to them,” Nagai said.

(This article was written by Tomoya Nozaki and Keiko Sato.)