Mother gets suspended term over death of abused daughter 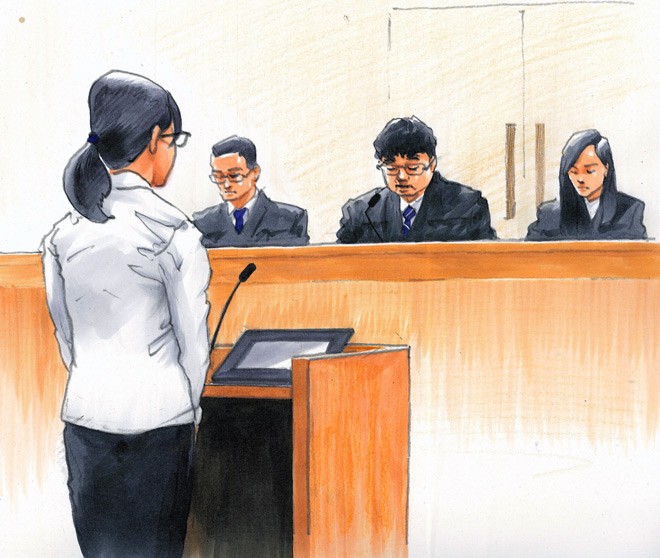 Nagisa Kurihara on trial at the Chiba District Court on June 26. (Image drawn by Kageyoshi Koyanagi)

CHIBA--A woman was found guilty of assisting in the abuse that killed her 10-year-old daughter, but her sentence was suspended after a court said she was also a victim of her “ruthless” husband.

The Chiba District Court on June 26 sentenced Nagisa Kurihara, 32, to two-and-a-half years in prison, suspended for five years with protective observation, for aiding and abetting her husband’s fatal abuse of their daughter.

The daughter, Mia, was a fourth-grader at an elementary school in Noda, Chiba Prefecture, when her body was found at the family’s home in January.

The case drew national attention after it was reported that Mia had asked school officials and child welfare workers for protection from her abusive father, but after a period in protective custody, she was returned to her father.

According to the ruling, Mia, injured by her father’s violence, repeatedly asked Nagisa to save her, but the mother apparently “went along with her husband by her own judgment.”

“Mia was overwhelmed by a feeling of hopelessness while getting weaker without any help from her mother,” Presiding Judge Kenji Koike said.

The court described the abuse by the husband, Yuichiro, 41, as “persistent and ruthless.” He has been indicted on charges of inflicting bodily injury resulting in death.

“Nagisa not only turned her eyes away from her daughter suffering from the abuse but also monitored the girl’s behavior and reported it to her husband,” the court said.

Nagisa pleaded guilty to the charges, but her defense team sought leniency, saying her husband had controlled her through his violence.

The court agreed that it was difficult for Nagisa to resist her domineering husband. The ruling also noted that Nagisa had no one with whom she could discuss her problems.

“Nagisa was greatly affected by her husband because of her mental weakness,” the ruling said.

The court said it suspended her sentence because she should be given a chance to reflect on her actions and rehabilitate herself in society.

One condition for the suspended sentence is that Nagisa receive guidance and advice from public organizations.

According to the ruling, Yuichiro forced Mia to continue standing in the bathroom in only her underwear, doused her with cold water and deprived her of sleep and food.

Although the girl was on the verge of death from Jan. 22 to 24, the abuse continued, and Nagisa contributed by not stopping her husband and not providing meals to her daughter, the ruling said.

Mia’s body was found in the bathroom late on Jan. 24.

Yuichiro will be tried under the lay judge system. The schedule for his trial has not been decided.