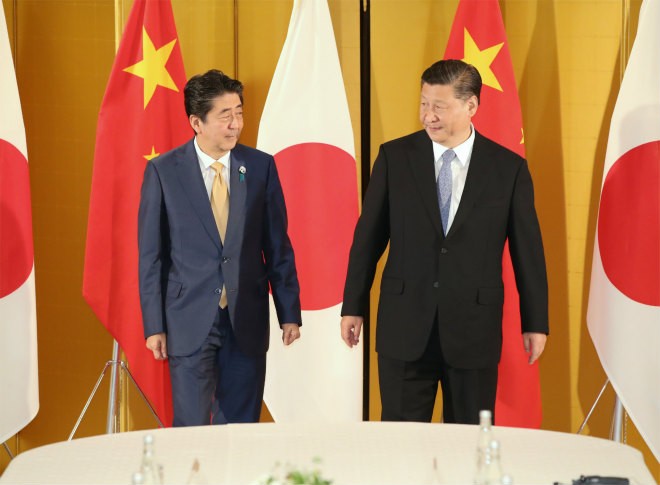 Prime Minister Shinzo Abe and Chinese President Xi Jinping head toward their respective seats for a meeting in Osaka on June 27. (Pool)

OSAKA--Prime Minister Shinzo Abe played up Japan’s improved relations with China on June 27, apparently in hopes of setting the tone for a meeting between Chinese President Xi Jinping and U.S. President Donald Trump.

Abe and Xi met here before the formal start of the Group of 20 summit on June 28, and the prime minister wanted to capitalize on the fact that it was Xi’s first visit to Japan as Chinese president.

During their meeting, Abe told Xi he wanted to welcome him “for a state visit in spring next year when the cherry blossoms are blooming.”

Xi responded that the proposal was a “good idea.”

Although their meeting was held on the sidelines of the G-20 summit, Abe emphasized the importance of Xi’s visit by then hosting a dinner reception for the Chinese president.

Behind the apparent blossoming friendship between Abe and Xi was a meeting scheduled for June 29 between the Chinese leader and the unpredictable and often confrontational president of the United States.

With the United States and China now engaged in a bitter trade war, Abe, as host of the G-20 summit, does not want to see a blowup between Xi and Trump during their talks.

Such a confrontation could have a major negative effect on the results of the summit and leave mud on Abe’s face as the Upper House election looms next month.

Xi told Abe in their meeting that it would be important for any declaration emerging from the G-20 summit to contain wording about “protecting multilateralism and free trade.”

That was apparently meant to show China’s support for the summit host to bring together a declaration that can be agreed upon by all the leaders, including Trump.

At the start of his meeting with Xi, Abe said bilateral relations with China had completely returned to a more normal course, adding that he wanted to create a new age for Japan-China ties by working closely with Xi.

Xi responded that relations between the two nations stood at “a new and historic starting line.”

After the meeting, Yasutoshi Nishimura, a deputy chief Cabinet secretary, briefed reporters and touched upon the “eternal neighbors” term used by Abe to describe the bilateral relationship.

Nishimura said the two nations had to engage in constant and close communications because of their geographical relations. He added that despite the many issues between the two countries, the relationship could be managed and improved by building trust through mutual visits by the two leaders.

In apparent reference to the huge protests in Hong Kong over proposed legislation to extradite criminal suspects to China for court proceedings, Abe said it was important to guarantee universal values, such as respect for human rights and rule of law.

Abe’s reference to the territorial dispute over the Senkakus highlights the reality behind China’s more friendly approach at the top leader level.

China still refers to the Diaoyu Islands as a “core interest” from which it cannot be seen to be backing away.

Intrusions by Chinese government-related vessels into Japan’s territorial waters around the Senkakus have occurred at a pace of three or four times a month, and the total number this year has already reached the same level for all of 2018.

Chinese ships have also been spotted in the contiguous zone just outside territorial waters for a record 64 straight days.

"It is clear China is trying to back up its territorial claim by giving the impression that its ships are constantly in those waters,” a Japanese government source said.

No progress has been made in talks about joint development of oil fields in the East China Sea. Japan has had to protest whenever it sees signs of test drilling by China in those waters.

“No matter how much bilateral ties improve, nothing fundamentally about China will change,” a government source said.

A Chinese diplomatic source said although Beijing would seek to strategically improve ties with Japan, many outstanding issues must be resolved before “trust” can be created between the two leaders and their nations.