A number of migratory fish species that cannot normally survive winter here have recently been found in waters off the Izu Peninsula. (Video by Kazuhiko Okada) 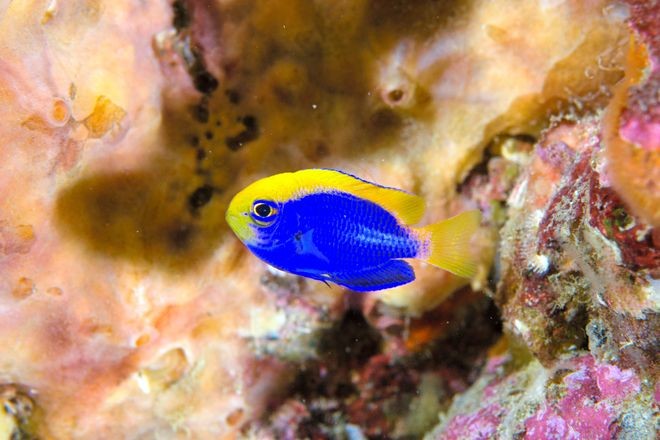 A young Starck's demoiselle spotted April 2 in waters off the Kumomi district in Matsuzaki, Shizuoka Prefecture (Provided by Kazushige Horiguchi)

Local guide Yasuhisa Itoi, 54, who has been diving in the area since 1990, said it was the first time for him to “find southern area species that lived through winter.”

Under ordinary conditions, young fish that venture into waters with the Kuroshio current in summer to autumn die out in February to March due to falls in water temperature.

But this year, the seawater temperature did not drop significantly, allowing species from warmer waters to survive the coldest months until April.

On April 2, Itoi and photographer Kazushige Horiguchi, 32, dived in Suruga Bay off the Kumomi district here on the Pacific coast of Honshu.

Descending to a depth of 20 meters, they sighted vivid red and white warty frogfish, checkered longnose hawkfish and stout chromis.

They also encountered tarry hogfish, Starck's demoiselle and threespot dascyllus in the waters with a temperature of 17 degrees.

The seawater temperature usually drops to around 14 degrees off Izu, but it stayed at least 16 degrees in many areas this year. Owing to that, southern species were discovered this spring in many parts of the bay.

Seaweed growth has also been sluggish this year in the area.

“The supply of warm water from the greatly meandering Kuroshio current as well as the warm winter may have led to the trend,” said Kunio Kutsuwada, a marine meteorology professor at Tokai University’s School of Marine Science and Technology. “This is something I want to examine more closely."

Kutsuwada said data on Suruga Bay suggests that in the long-term, "the seawater temperature is rising.”

Yellowtail clownfish used to be unable to survive winter there, but now are still present after 20 years or so.

The species has recently been confirmed to lay eggs off Izu, and yellowtail clownfish can now be found there all year round.