EDITORIAL: Proliferation of ‘anti-Japan’ label points to a dangerous trend 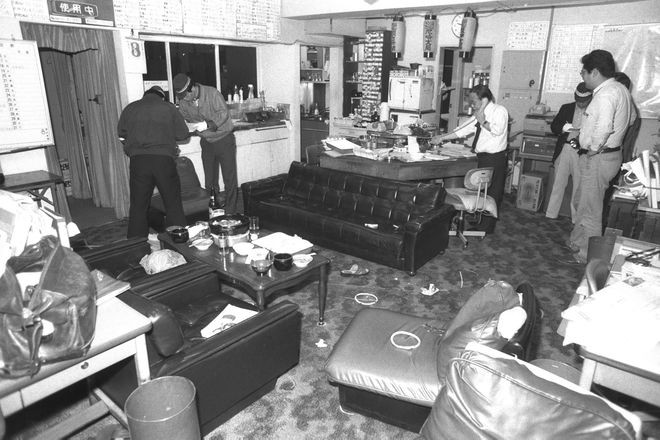 Police officers investigate The Asahi Shimbun Hanshin Bureau’s editorial office on the second floor of its building in Nishinomiya, Hyogo Prefecture, on May 3, 1987, after a masked man shot two reporters there earlier that day, killing one of them and injuring the other. (Asahi Shimbun file photo)

May 3 will mark the 32nd anniversary of a fatal shooting in The Asahi Shimbun's Hanshin Bureau in Nishinomiya, Hyogo Prefecture. On that day in 1987, a masked gunman stormed the bureau and opened fire with a shotgun, killing a reporter and injuring another.

Tomohiro Kojiri, the 29-year-old journalist killed in the attack, used to frequent a coffeehouse in the neighboring city of Amagasaki.

The shop, opened by Kim Seong-il (Soniru Kimu), a second-generation Korean resident in Japan, six years before incident was a regular hangout for citizens involved in protests against discrimination as well as local residents interested in environmental issues.

Kim, now 67, kept refusing to be fingerprinted, a requirement for foreign residents in Japan under the alien registration system at that time, criticizing the practice as “a policy of racial discrimination that has continued from the era of Japan’s colonial rule of the Korean Peninsula.”

As a result, Kim was arrested in November 1986. At the police station, he was held down by police officers and forcefully fingerprinted.

Kojiri, the victim of the shooting, interviewed Kim after he was released and wrote a report about issues concerning the fingerprinting system.

The term “han-nichi” appeared repeatedly in statements issued by the unknown perpetrator(s) of a series of terrorist acts for which a group that called itself “Sekihotai” claimed responsibility. The attack against The Asahi Shimbun’s Hanshin Bureau, which occurred six months after Kojiri’s report was published, was one of the terror acts by the group. In claiming responsibility for the attacks against The Asahi Shimbun’s Hanshin Bureau and the corporate dormitory for the Nagoya Bureau, the obscure group said, “A han-nichi bunshi (anti-Japanese element) only deserves capital punishment” and “the anti-Japanese Asahi must return to what it was 50 years ago.”

The term “han-nichi” is now ubiquitous in cyberspace and mass media. People of all walks of life, from politicians to ordinary citizens, use this term in publicly communicating their messages while revealing their names and faces. A wide range of topics are discussed in these messages, from Japan’s diplomatic disputes with neighboring countries to issues concerning daily life.

Three years ago, an angry blog post by an anonymous mother criticizing the government’s tardy policy response to the problem of a shortage of daycare facilities was denounced as “han-nichi.” It is still fresh in our memories how the post, which said “Hoikuen ochita, Nihon shine!!!” ((My child) Failed to get in daycare. Die Japan!!!), attracted a storm of criticism.

But what does “han-nichi” really mean? Does nichi in this term mean Japanese society or the Japanese government? What kind of words and acts qualify as “han?”

The term “han-nichi” is dangerous because it can be used casually without clarifying these questions as a simple label to stigmatize people and organizations in efforts to suppress their speech and ostracize them.

The “Nihon shine” post was also criticized for its “violent language.” But the term “han-nichi” tends to be used in more brutal, bigoted verbal “attacks” that are different in nature from criticisms in such exchanges of opinions.

Kim voices concerns about this trend, saying, “I feel that (Japanese) society has been changing in the direction Sekihotai favored.”

Given the history of Japan’s prewar era, when freedom of speech was destroyed by a national campaign against criticism of the militarist regime symbolized by the term “hikokumin” (literally “non-national,” actually meaning unpatriotic person), Kim’s concerns should not be brushed aside as a “groundless fear.”

Kim closed his coffeehouse last autumn. But he will hold a local ceremony in memory of Kojiri this May 3 as he has done year after year.

The Constitution of Japan envisions a society where individual citizens engage in free and active exchanges of opinions while respecting the views of others, putting aside their differences in nationality, ethnic roots, thought and creed.

As a news organization, this newspaper renews its determination to work with citizens to help build such a society.