Empress Masako, a supporter of youth, animals and learning 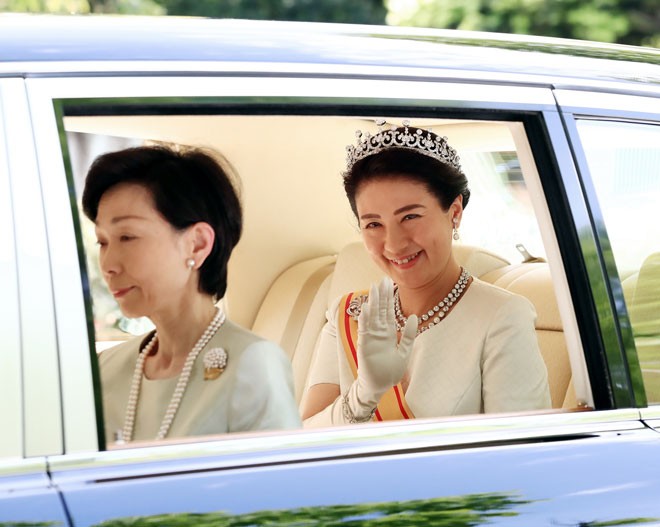 Empress Masako on her way to the Imperial Palace on May 1, when her husband, Naruhito, became the new emperor (Kazutaka Eguchi)

Many people watching the televised ceremony at the Imperial Palace on May 1 were fixed on Masako, the new empress who has been largely out of the public eye in recent years.

Masako’s appearance in a tiara and robe decolletee and her smile assured those who know her that she is still the kind, caring individual with a fondness for animals and an appetite for learning.

“She looked just as sweet as when I knew her as the crown princess,” Yoko Tsurimaki, a 22-year-old from Fukushima Prefecture, said about the ceremony marking the ascension of Naruhito as new emperor. “But she looked even more graceful.”

Early that year, she sent Masako a letter that detailed the activities of students from disaster-affected junior and senior high schools. Tsurimaki and the other students were preparing to share their experiences with a global audience at a program sponsored by the Paris-based Organization for Economic Cooperation and Development.

Tsurimaki, a high school student at that time, asked Masako to come and see how hard the students were working for the program.

She never expected Masako to grant her wish. But Masako and Naruhito visited the students at an event held in Tokyo.

Tsurimaki served as the couple’s guide at the event. Masako and Naruhito told the students they were impressed by their activities and provided words of encouragement and support after asking them about their aspirations.

“I felt strongly that they truly wanted to help young people,” Tsurimaki said.

In February 2015, the students and teachers who participated in the OECD project were invited to the imperial couple’s residence in Tokyo’s Moto-Akasaka district.

The couple tried to calm their guests’ jitters with tea and cakes, and they listened to the disaster survivors’ experiences for about 50 minutes.

“The new emperor and empress will be even closer to the people than before, as was shown by his repeated pledges to be with the people,” Tsurimaki said. “It will be greatly encouraging if Masako highlights her gentleness and support for young people in her new role.”

Olivier Mellerio, a 73-year-old Frenchman who lives in Paris and is a close friend of the imperial family, describes Masako, former diplomat, as an avid learner, even during her long struggle to overcome an “adjustment disorder” that limited her public appearances.

He is invited to the couple’s home each time he visits Tokyo. He became acquainted with Masako through her father, Hisashi Owada, former vice minister of the Foreign Ministry.

Mellerio and Owada worked together when he was the Japanese ambassador to the OECD.

“We are living in an increasingly complex world and face a tough time ahead, but I would like to see her play a role as the nation’s symbol in bringing the Japanese people together,” he said.

As empress, Masako will take over the duty of silk cultivation at the Imperial Palace from Empress Emerita Michiko, a tradition passed down by successive empresses to shore up the country’s sericulture.

Squeamishness about the creatures will not be a problem for Masako, who has displayed a great interest in small creatures since she was a young child.

“I vividly remember that Masako loved small snakes, newts, hamsters and killifish,” said Yasunori Kishida, 69, head of the Japan Heterocerists’ Society, who served as an adviser to the biology club that Masako joined when she was attending Denenchofu Futaba Elementary School, a private school in Tokyo’s Setagaya Ward.

“She did not have a problem with touching them at all and took good care of them,” he said.

Her fondness for animals continued after her marriage to Naruhito.

Masako took care of a dog that had strayed into their residence. She also raised sawtoothed stag beetles after she found their weakened mother outside a window of their residence. Aiko, the couple’s only child, also loves animals.

“Emperor Emeritus Akihito and Empress Emerita Michiko have valued living things and nature, and the new emperor and empress will continue that attitude,” Kishida said.

(This article was written by Ayako Nakada and Yudai Ogata.)