Soft seabed puts U.S. base project in Okinawa back in tight corner 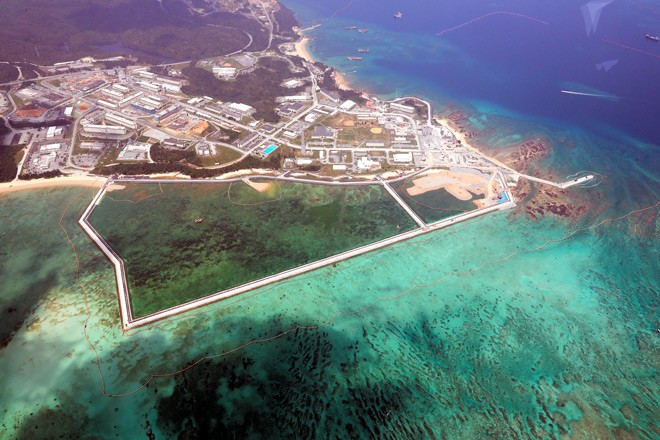 Landfill work is under way for the construction of a new U.S. military base off the Henoko district of Nago, Okinawa Prefecture. (Eiji Hori)

With work under way to build a new U.S. military base off Okinawa Prefecture, the newest, and perhaps biggest, obstacle is the sea floor, which civil engineers describe as "soft as mayonnaise."

Stabilizing the seabed in Oura Bay for land reclamation will be a formidable challenge in the contentious project.

Okinawans have time and again expressed opposition to the project off the Henoko district of Nago. The most recent backlash was a referendum in February, in which 72.15 percent of voters in Okinawa cast their ballots against the planned landfill construction.

A string of revelations over the past months have raised further doubts about undertaking such a huge civil engineering task despite many uncertainties, including the soft sea floor in Oura Bay.

The landfill, together with land on Henoko, is expected to house V-shaped runways to take over the functions of the Marine Corps Air Station Futenma in Ginowan in the prefecture.

So far, the landfill is being constructed in the sea, not in the bay, because the work poses less obstacles there.

The Defense Ministry acknowledged only recently that shoring up the sea bottom will be needed in the bay. About 77,000 sand-made piles are planned to be driven into a 65.4-hectare area, or about 60 percent of the land to be reclaimed from the bay, to stabilize the seabed.

That will entail an additional 6.51 million cubic meters of sand, or the amount needed to fill the equivalent of 5.25 Tokyo Domes. The figure alone is comparable to several years’ worth of the annual amount of gravel that the prefecture uses for public works projects.

“The ministry has confirmed that the problem of the soft seabed can be overcome through an existing construction method, which has been routinely used, and, thus, the landfill project will proceed in a stable manner,” he said.

When land was reclaimed from Tokyo Bay for the expansion of Haneda Airport, as many as 250,000 piles were used to cover a 129-hectare area, according to the ministry.

But a sharp difference between the Haneda and Henoko sites is the extent of the depth of the sea floor that needs to be stabilized.

At Haneda, piles were inserted into the sea bottom 40 meters below the surface of the water.

In Oura Bay, the seabed lies 30 meters below the surface and soft layers exist up to 60 meters down from there, according to the ministry.

Iwaya insists that “it has been established that a hard clay layer lies at depths 70 meters or more beneath the sea level."

But Shoji Kamao, an associate professor of geotechnical engineering at Nihon University, voiced skepticism about the ministry’s explanation, describing the Henoko project “unusual” in many respects.

One question is whether the layer below the soft ground is as firm as the ministry claims.

“Soil gets harder due to its weight when it lies deeper,” he said. “But as far as the ministry’s data is concerned, the hard layer that is said to exist beneath may not be an entirely separate layer from the soft seabed.”

The sea floor at depths 70 meters or more below the water surface must also be stabilized to prevent the landfill from possible sinking, Kamao said.

But work vessels that have been utilized to stabilize the sea bottom soil in Japan are designed to handle piles only up to a depth of 70 meters.

Another problem, he said, is part of the final design to proceed with actual construction has yet to be set.

That means that the detailed design, including what materials will be used and what kind of construction method will be adopted, has not been hammered out due in part to the need for ground improvement work.

Iwaya, noting the urgency of finalizing the design, said the ministry will get it done as soon as possible.

Kamao criticized the government for proceeding with land reclamation, while the construction method has yet to be set for the technically challenging section in Oura Bay.

“It is unimaginable that actual engineering has not been decided at this stage in the case of a regular civil engineering project,” Kamao said.

Cost will also be a major headache. The construction of the U.S. military base is a public works project that the central government will entirely finance with Japanese taxpayer funds.

But the detailed estimate for the overall cost has not been presented to the public.

In 2013, the project was budgeted at 231 billion yen ($2.06 billion) and rose to about 240.5 billion yen the following year. The final tab will most likely balloon to a much larger figure, given the need for shoring up the seabed.

“The land reclamation work is an extremely difficult project, considering how to secure a huge amount of earth and sand alone,” Kamao said. “I cannot comprehend that such a public works project is being pressed forward without a blueprint for the final price tag.”

But it is almost a certainty that the project will take longer than that.

The central government must gain approval to start the seabed improvement work from Okinawa Governor Denny Tamaki. But the governor, who is staunchly opposed to the relocation of the Futenma base within the southernmost prefecture, would not give the go-ahead in an attempt to halt the base project.

The likely legal battle between the central and Okinawa governments will further delay completion of the project.

Tamaki has requested that the central government suspend the land reclamation work and start a dialogue with prefectural officials over alternatives to the Henoko project.

The governor would like to see Futenma moved outside Japan, as Okinawa, only 0.6 percent of the Japanese territory, is already home to 70 percent of U.S. military installations in the country.