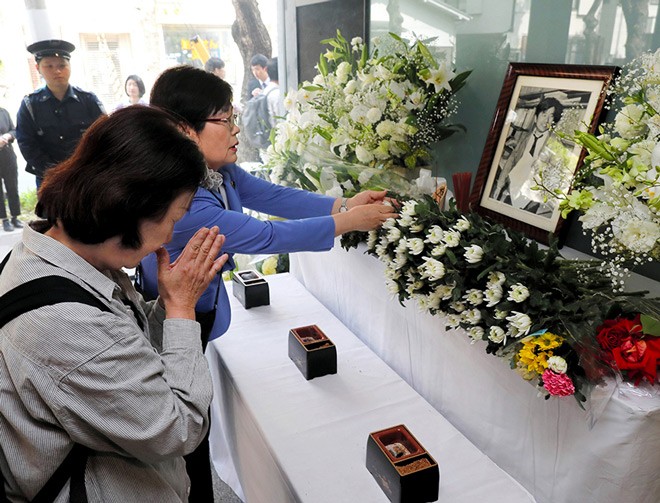 NISHINOMIYA, Hyogo Prefecture--Hundreds of people visited an Asahi Shimbun bureau here May 3 to mark the 32nd anniversary of the fatal shooting of a reporter by a masked gunman.

Separately, about 100 people with ties to The Asahi Shimbun, including the company's president, Masataka Watanabe, offered one-minute silent prayers at 8:15 p.m., the time of the shooting, at the Hanshin Bureau.

The slain reporter, Tomohiro Kojiri, 29, was assigned to the newspaper's Hanshin Bureau. Another reporter was injured in the gunfire.

About 590 people turned up at the bureau on May 3, which is Constitution Day. The room on the third floor of the office that exhibits materials related to the incident was opened to the public.

Kazuya Okamoto, 39, a company employee in Nishinomiya, Hyogo Prefecture, said after visiting the room for the first time, “It is wrong to use violence to suppress those with different ideas.”

Okamoto said he learned at university that freedom of thought and speech forms the foundation of democracy.

“I feel a sense of danger about the current situation where speech has become increasingly one-sided and communication does not deepen, as is seen in the prevalence of hate speech," he said.

“I pledged that we will firmly protect the freedom of speech as successors to him,” Furukawa said.

Kenji Takayama 57, a reporter who also was in the Hanshin Bureau office at the time of the shooting, said: “Whenever May 3 comes every year, I recall the regret and sadness of that day. I must write articles, including those that should have been written by Kojiri.”