Sexually abused daughters often feel silence is their only option 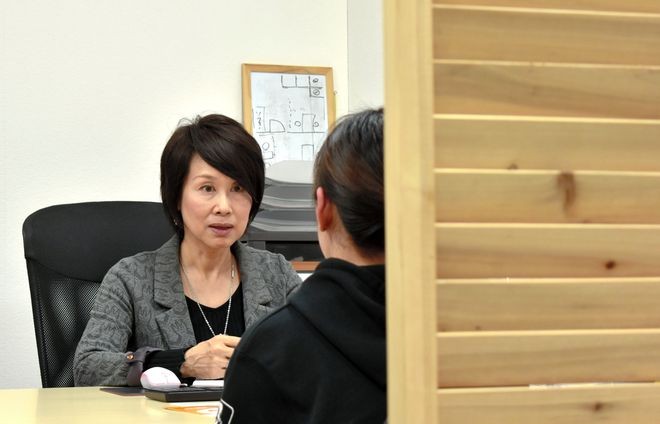 Minako Fujiki talks in Osaka with a woman who was sexual abused by her father. (Kumiko Nakatsuka)

Victims of domestic sexual abuse often find that their own behavior is the main subject of questioning in criminal trials.

Sexual violence victims and their supporters say the acceptance of such questioning and recent acquittals in incest cases show the courts have no grasp of the horror and terror the women have experienced in their lives.

“The power in relationships between parents and children is not equal” said a woman who was sexually abused. “Out of fear, it is impossible to resist.”

In a recent trial in Aichi Prefecture, a court acquitted a sexually abusive father after ruling that the daughter was not in a state in which resistance was impossible.

A woman living in Osaka Prefecture was one of many who expressed shock at the verdict. At 19, she is the same age as the victim in the Aichi case and was also sexually abused by a family member.

“The ruling is saying that I should have put up more resistance. But it is impossible to do so. I want (court judges) to know that,” she said.

She explained why victims stay silent.

Her stepfather sexually abused her when she was a second-grader at elementary school. She was taking an afternoon nap on a vacation when he approached her and said, “Be quiet.”

She said she was so afraid of him that she had no choice but to obey his orders.

“I could only muster up the courage to say to him, ‘I want to go to the toilet,’ to get away from there,” she recalled.

Later, her elder and younger sisters said the stepfather had touched their bodies. However, she could not bring herself to ask them about the details.

The stepfather ruled the home with violence. The woman said her older sister once took a hostile attitude toward the stepfather, so he hit her with a hanger and locked her out of the house in mid-winter.

The woman said she always paid attention to her stepfather and tried not to make him angry by, for example, washing the dishes enthusiastically.

She said she thought that her family would collapse if she revealed what he had done to her, so she kept quiet.

When she was a high school student, she had an opportunity to talk with a classroom teacher from her junior high school days.

She told the teacher that her stepfather was physically abusing her younger sister. And she finally revealed her own suffering.

But speaking out about her stepfather did not improve her life.

After the teacher reported the case to a child counseling center, the high school girl was admitted to a protective custody facility.

She lost her daily life at school and at home. Feeling that her life had no meaning, she consumed a large quantity of pills and was hospitalized. She dropped out of school because she was unable to gain the sufficient number of credits.

She now lives apart from her family.

“Court judges should learn that victims cannot put up resistance due to their thoughts that they do not want to destroy their families,” said a woman in the Kansai region who learned that her second husband had sexually abused her daughter when she was in her early teens.

The husband repeatedly raped the girl when her mother was out working or receiving hospital treatment, she said.

The daughter suffered from such symptoms as a narrowed field of vision and irregular pulse and became unable to attend school.

Although she received treatment at the psychiatry department of a hospital, she kept quiet about the assaults by her stepfather.

After the daughter entered high school, a teacher felt that something was wrong and contacted her mother.

The girl then broke her silence.

“I wanted my family to save me,” the girl told her mother. “But if I told the facts, I would make my father a criminal. It would also break the heart of my brother. Therefore, I was reluctant to (reveal the truth).”

The mother said she had no idea what was happening to her daughter.

“The assailant was a member of the family, not a stranger,” the mother said. “Because of that, he could cleverly sneak around so that other family members would not notice (his actions).”

The mother suffered mental shock over the sexual abuse of her daughter as well as her husband’s “betrayal.”

She joined a group of mothers of victims of sex crimes, and has since been sharing information for trials and talking with experts.

Her daughter, meanwhile, is unable to work because of mental disorders and is now receiving treatment at a medical institution.

Minako Fujiki, 59, a representative of Wana Kansai, a support group for victims of sexual abuse and domestic violence, said, “Many victims are suffering from mental problems.”

Most of the victims grew up without telling others that they suffered from sexual violence, she said.

Even if they talked about it, they were told that they would face more difficulties answering questions from the police or that they lacked evidence because the abuse was conducted in a closed room, she said.

Fujiki operates the Maluhia welfare service facility in Osaka that offers vocational training and restores feelings of self-respect. Women in their teens to 20s who were sexually abused by their parents attend the facility.

Fujiki also suffered from repeated sexual violence by her stepfather when she was 11 years old.

She said she had nowhere to go except for her home.

“Society must offer a place to rescue victims and accept the fact that children believe they must always obey their parents,” she said.

In March, the Shizuoka District Court acquitted a man accused of raping his eldest daughter when she was 12. The ruling said it is extremely unnatural that other family members did not notice his act.

In the same month, the Okazaki branch of the Nagoya District Court acquitted a man charged with quasi-forced sexual intercourse against his 19-year-old daughter.

To gain a conviction for quasi-forced sexual intercourse, prosecutors must show that the victim was in a state where resistance was impossible, such as being unconscious through drugging. Prosecutors in this case said the father’s history of abuse had put the daughter in such a state.

The ruling recognized that the father started sexually abusing the daughter when she was a junior high school student and that he was sometimes violent.

However, the ruling did not recognize a strong control-obedience relationship between the father and the daughter, and it said the daughter’s daily life was based on her own intentions to some degree.

“It cannot be said that it was extremely difficult for the daughter to resist her father,” the court ruled.

The acquittal of the father prompted public protests.

“Focusing on whether a daughter was able to put up resistance while suffering from sexual abuse is beside the point,” said Masato Noda, professor of judicial welfare at Ritsumeikan University, who has detailed knowledge on child abuse issues. “She cannot offer resistance unless she knows how to do so.”

He noted that children who have yet to learn how to seek help or fight back often continue to suffer from violence at home.

“Sexual violence is the same as domestic violence and abuse in that the victims are strongly controlled mentally by the assaulters and are deprived of the choice to resist,” he said.

He added that all people who deal with child abuse cases need to recognize that.

Research in recent years has found that abuse can even distort the shape of the brain of the victim.

“Even if the number of times a child suffers from sexual abuse is only once, separating her from her father must be done,” he said.