Tests to start on next-generation Shinkansen with different noses

The Alfa-X, a test train of the next-generation Shinkansen, is shown at East Japan Railway Co.'s Shinkansen General Rolling Stock Center in Rifu, Miyagi Prefecture, on May 9. (The Asahi Shimbun) 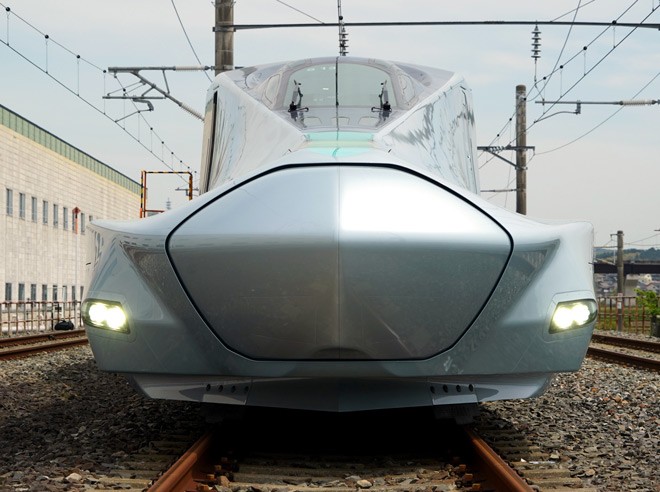 The front car of the Alfa-X, the test train of the next-generation Shinkansen, in Rifu, Miyagi Prefecture, on May 9 (Shigetaka Kodama)

RIFU, Miyagi Prefecture--East Japan Railway Co. said it has completed a test train of the next-generation Shinkansen, which will run at 360 kph, the fastest in the world.

The test train, named Alfa-X, was shown to the media at the company's Shinkansen General Rolling Stock Center here on May 9.

The train will start test runs between Sendai and Shin-Aomori stations on the Tohoku Shinkansen Line on May 10.

The “nose” of the front car is about 16 meters long while that of the 10th and last car is 22 meters. Using the two types of noses, JR East will compare how the trains stand up to pressure waves when they enter tunnels at high speeds.

Faster Shinkansen trains could take longer to pull to a halt when an earthquake strikes.

To overcome this, JR East aims to put into practical use a system of “aerobraking” that takes advantage of air resistance.

The company will also work on new technologies to ensure smooth automated operations in the future.

The fastest speed during test runs is expected to be 400 kph.

Based on the results of the test runs, JR East will develop the commercial model by fiscal 2030 when the Hokkaido Shinkansen Line is scheduled to be extended from Shin-Hakodate-Hokuto Station to Sapporo.