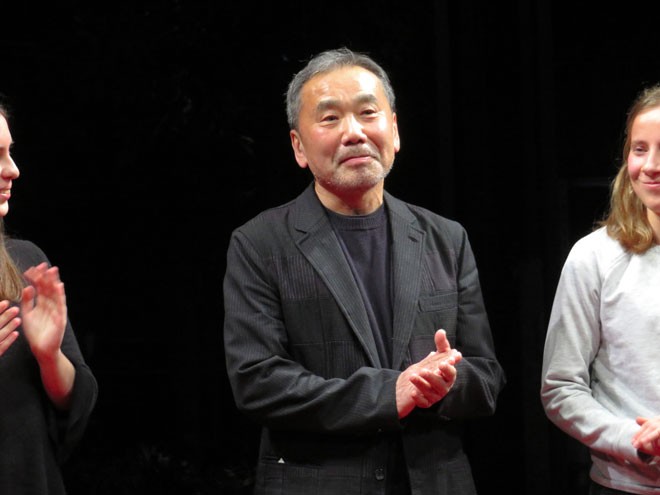 Influential novelist Haruki Murakami has spoken and written about many subjects in his long internationally acclaimed career, but one in particular has rarely got a mention: his father.

Breaking with tradition, Murakami, 70, tackles his late father’s time in the Imperial Japanese Army in China in the June issue of the monthly magazine Bungei Shunju.

The piece, “Neko o suteru: Chichioya ni tsuite kataru tokini boku no kataru koto” (Abandoning A Cat: What I Talk About When I Talk About My Father), came out on May 10.

At the start of the article, Murakami recounts a memory from when he was in elementary school of going out to abandon a cat with his father, Chiaki.

When they returned home, the pair are spooked to find the cat has somehow already returned.

Murakami writes about the episode in his signature lyrical style. But his tone changes when he touches on his father’s war experience.

Chiaki was born the second son of a Buddhist priest in Kyoto in 1917. He was 20 and still in school when he was inducted into the Imperial Japanese Army’s 16th Division’s 16th Regiment as a soldier in a transport battalion in 1938.

When Murakami was in elementary school, his father told him that his troops once executed a captured Chinese soldier.

“Needless to say, the barbaric sight of a human head getting cut off by a military sword was deeply etched into my young mind,” Murakami writes.

The impression was so strong, the author says, that he feels he has partially inherited the experience from his father.

Confronting wars and violence has been one of the most important themes throughout Murakami’s works.

“No matter how unpleasant things are and how much we want to look away from them, human beings have to accept such things as part of ourselves,” writes Murakami. “If not, where would the meaning of history lie?”

His relationship with his father became further strained after he became an author.

“We didn’t see each other at all for more than 20 years,” Murakami says in the article.

Shortly before his father's death in 2008, however, they “did something like a reconciliation.”

“I met various people who had a relationship with my father, and little by little, I started listening to stories about him,” he writes.

A character in “Kishidancho Goroshi” (Killing Commendatore), a long novel the author published in 2017, relates a war story similar to the one Murakami’s father told him.