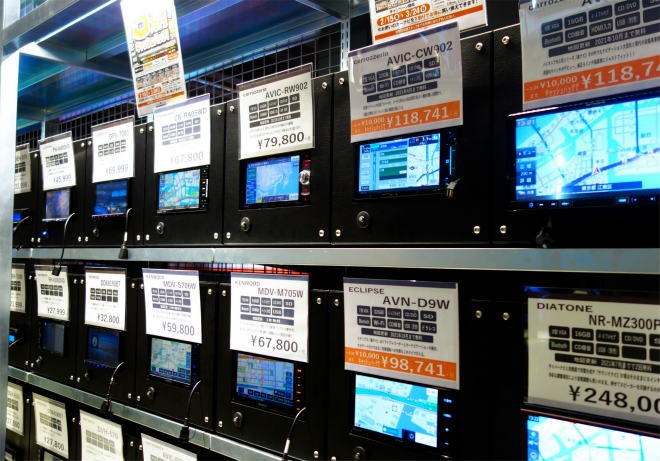 A section for car navigation systems is seen March 19 at an auto goods shop in Tokyo’s Koto Ward. (Ryoko Takahashi)

Car navigation systems have been a godsend to drivers in helping them find their way, but the manufacturers are now having a hard time charting their own course for the future.

That may come as a surprise, since the systems have exemplified Japan’s famously perfectionist manufacturing industries, complete with high-precision maps, route guide functions and beautiful displays.

Manufacturers of these systems, however, have been facing a noticeably bumpier road in recent years. A glimpse into the background shows the cataclysmic change taking place in the world’s auto industry.

A number of major players in the car navigation systems industry have recently come under the umbrella of major companies as all were struggling financially and finding it difficult to stay afloat on their own.

In January, Alps Alpine Co. was born of a business integration between Alpine Electronics Inc., a leading player in the car navigation systems industry, and Alps Electric Co., a major electronic parts maker that was Alpine’s largest shareholder.

Alps Electric, which had more than a 40-percent stake in Alpine, turned the latter into its wholly owned subsidiary. The arrangement was aimed at boosting technological development by combining Alpine’s excellence in car navigation systems with Alps Electric’s technologies in producing auto parts, such as sensors and switches, officials said.

Clarion Co., which was a subsidiary to Hitachi Ltd., was acquired in March by Faurecia SA, a major French auto parts manufacturer, and had its shares delisted.

And Pioneer Corp., known for its “Carrozzeria” imprint, in March also became a wholly owned subsidiary to a Hong Kong investment fund and had its shares delisted. Pioneer is hoping to have its business rehabilitated by receiving about 102 billion yen ($914.2 million) in financial assistance from the fund.

Car navigation systems, found on many cars, are becoming increasingly advanced in their functions, including in their communication features. Demand for them is expected to grow further in an age when consumer electronic products will be going online, including under an “Internet of Things” setup.

The market size is actually expanding.

Figures of the Japan Electronics and Information Technology Industries Association show that 6.14 million units of car navigation systems were shipped out in 2018, up from 4.48 million units in 2008.

It may appear puzzling in that light that manufacturers are struggling.

Declining prices represent one of the factors.

The strength of car navigation system makers lies in their commercial products, which are marketed at auto goods shops and other outlets, with manufacturer brands pushed to the fore. It is common for upmarket models to carry price tags of several hundreds of thousands of yen, as they proudly tout large screen sizes and other features.

Car enthusiasts continue to prefer upscale models of that type. As the market has expanded, however, cheaper and simpler navigator products have also come to circulate more broadly. In addition, more and more drivers are using smartphone map apps, which are becoming more popular, instead of car navigation systems.

Unit prices of car navigation systems currently average about 80,000 yen, about half of the levels a decade ago, according to Autobacs Seven Co., a major chain of auto product shops.

The rising presence of automakers is another factor.

In the past, a consumer typically went to an auto goods shop to have a car navigation system installed in a new car after purchasing the vehicle. Commercial products were therefore the main players in the market. Car enthusiasts, who preferred products with advanced functions, accounted for a large part of the visitors to auto goods shops.

In recent years, however, it is becoming increasingly common for a car navigation system to be installed in a vehicle at a dealership, in the name of a “dealer’s option,” before the car is delivered to its purchaser. Enthusiasts who do care about functions and appearances account for a smaller share of the buyers of similar “dealer’s option” products.

In addition, there is also a growing share of “automaker’s option” car navigation systems, which are embedded in automobiles, as early as along a production line at a manufacturing plant, as an authorized component of a car model.

The market is therefore currently split into three parts by automaker’s option products, dealership’s option products and commercial products being marketed by the car navigation system manufacturers themselves.

Car navigation system manufacturers have shifted their focus onto automaker’s option products to cope with the changing demand.

Adoption of a car navigation system as an automaker’s option product, to be installed in vehicles at their manufacturing plant, allows the maker of that system to bank on a stable volume of transactions over several years until there is a model changeover of the vehicle body. That appears particularly attractive at a time when commercial products are being sold at ever lower prices.

That trend, however, has gradually eroded the management vitality of car navigation system manufacturers.

The culture of “kaizen” (improvement), which is about ceaseless efforts to reduce costs and improve work efficiency, has taken root in automakers, which are the manufacturers’ transaction partners.

Performance worsened for many car navigation system makers as that trend continued.

Besides the increasing pressure for cutting costs, car navigation system manufacturers also need to deal with next-generation technologies as automobiles are increasingly becoming more advanced in their functions. They have also had to strengthen their products’ car navigation functions and improve their safety features, which consumed a lot of development expenses.

“The auto industry is in a time of change, which is said to exist only once in a century,” Alpine President Nobuhiko Komeya told an audience of shareholders last December at the opening of an extraordinary shareholders’ meeting, where a plan for business integration with Alps Electric was proposed. “It will be difficult for us to stay afloat on our own.”

Competition over technologies, including for self-driving functions and communication features, is speeding up in the auto industry. The role of car navigation systems is also expected to evolve from that of a mere “navigator” and grow more advanced in their functions.

They could double as tools for watching movies or for playing video games on. They could issue warnings about approaching obstacles or other dangers on the basis of information obtained from onboard cameras and sensors. Car navigation systems could even serve as instruments for switching a manual driving mode to a self-driving mode.

There are active moves for seeking to renovate functions on and around the dashboard, including those of car navigation systems.

Such development efforts require both broad-based knowledge of driving control and financial resources for making continued investments. They are being led by major auto parts manufacturers, known as megasuppliers, which work on a broad variety of component parts and have the capacity to negotiate with automakers on an equal footing.

Robert Bosch GmbH and Continental AG, both of Germany, Japan’s Denso, and Faurecia of France, which acquired Clarion--these megasuppliers have annual sales figures in the area of several trillions of yen.

By contrast, manufacturers that specialize in car navigation systems have modest annual sales ranging between 100 billion yen and 400 billion yen. They cannot compete against megasuppliers, either in stockpiling technologies or in financial strength.

Many car navigation system manufacturers have chosen to partner with major auto parts makers partly to gain a foothold by which to partly withdraw from a gradually declining industry, and partly also to acquire know-how for developing next-generation technologies.

President Koichi Moriya of Pioneer, which became a subsidiary to an investment fund, said he hopes to continue looking for new business partners in the years to come.

“We have to take aggressive steps to proceed with various forms of business cooperation,” Moriya said.

Flexibility and speediness for coping with changes will be requisite qualities in an age of next-generation cars.

An executive with a major auto parts maker said the company’s emphasis is more on software development than on hardware.

“Nobody can tell what car navigation systems will be like in the future,” the executive said. “Software matters.”

Information technology companies have also said they are entering the race for developing next-generation cars.

What will car navigation systems look like in the future when automobiles have further evolved? Companies are expected to continue looking for an answer to that question.