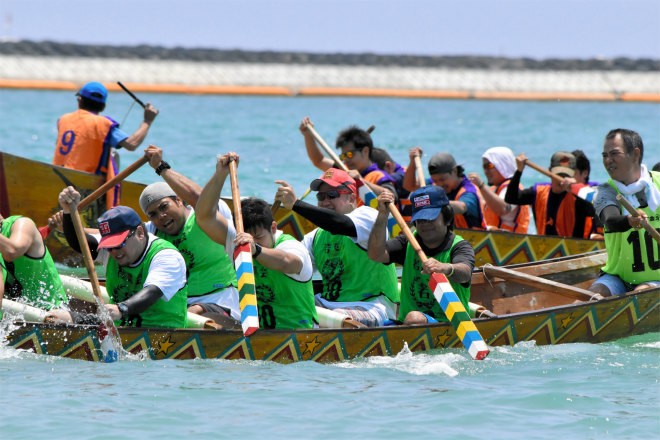 U.S. Marines take part in a traditional paddling event off the Henoko district of Nago, Okinawa Prefecture, on May 12. Seen in the background is the landfill work site for the construction of a new U.S. military base. (Shohei Okada)

NAGO, Okinawa Prefecture—U.S. military personnel and Japanese civilians set aside their differences and joined together in a traditional paddling event on May 12 at the site and source of their contention.

A total of 43 teams entered the competition in waters off the Henoko district of Nago, where the central government has started reclaiming land to build a new U.S. military facility.

Among the contestants were Marines from nearby Camp Schwab and service members from other U.S. bases in Okinawa Prefecture.

Under intense heat, the teams fought for the best times in paddling to and from a point 200 meters offshore.

The annual event is held to pray for the safety of local fishermen and a bountiful catch.

Opponents of the landfill work, which started in December, say the project will not only destroy the offshore environment but will also do nothing to ease Okinawa’s overwhelming burden of hosting U.S. military facilities in Japan.

The planned new base will take over the functions of the U.S. Marine Corps Air Station Futenma in Ginowan, also in the prefecture.