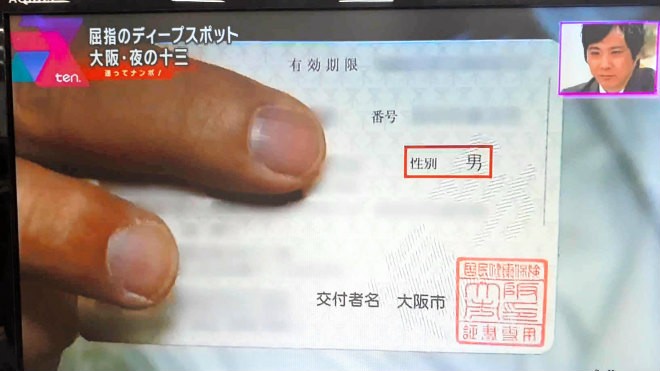 The man’s I.D. stating his gender is shown during the May 10 news program aired by Yomiuri Telecasting Corp. (Hikari Mokuta)

A TV broadcaster in western Japan apologized for airing a program featuring a comedy duo humiliating a man with persistent questions about his gender and sexuality, which invited a sharp viewer backlash.

The Osaka-based television station drew flak for its lack of sensitivity on an issue that was bound to incense minority groups.

In the segment, a male comic duo called Fujisaki Market ventured to the city's Juso entertainment district to discover whether a frequent customer to an "okonomiyaki" savory pancake restaurant was male or female, a topic that had apparently been on the minds of staff at the establishment.

The comedians caught up with the man as he walked his dog in the mall where the establishment is located.

A female employee of the restaurant whispered to the duo that she had always wanted to know if the man was female based on his somewhat androgynous looks due to bob-style hairdo and appearance of female breasts.

The duo then started pestering him with questions. Instead of immediately asking straight out about his sexuality, they tried to figure out his gender by asking the man his first name.

When the man refused to reveal it, they asked, “Do you have a girlfriend?”

Not ready to give up, the duo followed up with, “Are you not trying to find one?”

The duo kept asking why and how long had he been single.

After the exchange, the duo dutifully reported back to the female employee that the customer must be male because he answered the question about a “girlfriend.”

But the woman was not convinced, given his slightly protruding breasts.

Another female present at the restaurant joined the conversation and said, using slang, that the individual could be hermaphrodite and have both breasts and a male sex organ.

The duo went back to the man and bluntly asked, “What is your gender?”

The man identified as male. But the duo asked again, “Are you genuinely a man?” He replied, "Yes."

The duo pressed him by asking, “Are you a man who likes women?”

His reply did not sit well with the pair, and they asked him to show I.D. to confirm his gender.

The camera zoomed in on the man's national health insurance card that states, “Male.”

The duo finally revealed their interest in the matter, telling him, “Everybody was wondering because you have breasts.”

The man laughed, looked somewhat baffled and invited them to touch his breasts, which they inappropriately did.

The three went into the restaurant and announced his gender. The segment ended with a female bubbly voice-over that said, “A question was resolved! We are sorry, sir, for asking rude questions!”

Given the nature of some TV programs in Japan, it could have been just another borderline offensive segment that poked fun at someone else's expense and presented as a light joke.

But one of the regular commentators sitting in the studio was not in the least amused.

As the videotaped segment ended and the action moved back to the studio live on air, writer and commentator Koji Wakaichi snapped.

“Asking someone, ‘Which one are you? A man or a woman?’ That displays an unacceptable lack of sense of human rights,” he fumed.

“You should not intrude on someone’s sexuality like that,” the 68-year-old author added. “How dare you air this kind of thing. What were you thinking? As a news show? Seriously, think about it!”

While news anchors and other commentators remained silent, Wakaichi delivered a final punch.

“Even if the man had agreed to appear in the TV program, taking such an approach to an individual's sexuality represented a gross violation of his dignity and human rights.”

Viewers quickly responded to Wakaichi’s comments by posting their opinions on Twitter and other social networking sites.

Most agreed with Wakaichi and expressed similar sentiments, such as, “It was distasteful to watch.”

One person wrote, “I appreciate there was someone who rebuked it immediately and decisively live on air.”

Another made a self-reflective comment, “I was taken aback by his comments because I was laughing while watching the segment.”

Yomiuri Telecasting issued an official statement May 13 that said: “We aired extremely inappropriate coverage. We apologize deeply to viewers and all interested parties.”

The company decided to scrap the news program's regular segment with the comic duo for the moment.

It also promised to uncover how and why the segment was produced and ultimately aired, and make utmost efforts to prevent a recurrence.

Marina Kurashima, a representative of Tokyo-based Japan People with Gender Identity Disorder, said, “Gender is important personal information and it should not be asked without careful consideration.”

Kurashima felt that the news program projected “a premise in society that gender should be binary, male or female.”

“It enforced the notion that having a gender-ambiguous look is a bad thing," she said. "There are people who feel offended by having their gender talked about out of mere curiosity. The existence of sexual minorities is slowly taking hold, but the awareness in society that it is an issue of human rights is still lacking.”