Toshiba nominates non-Japanese to board, marking shift for Japan Inc. 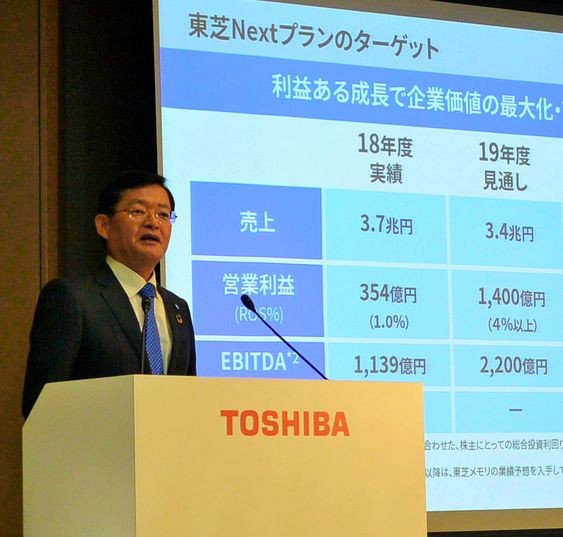 Nobuaki Kurumatani, chairman and chief executive officer of Toshiba Corp., at a news conference in Tokyo on May 13 (The Asahi Shimbun)

Toshiba Corp bowed to pressure from activist investors and said it would overhaul its board to include non-Japanese directors for the first time in 80 years, marking a dramatic shift at a cornerstone of corporate Japan.

The company, in the throes of a turnaround after being roiled by a crisis stemming from the bankruptcy of its U.S. nuclear power unit, said it would hike the number of external directors on its 12-member board to 10 from seven in June.

Toshiba nominated three non-Japanese directors as part of the board overhaul, while also forecasting a four-fold jump in annual operating profit to a previously flagged level.

The board shake-up comes after U.S. hedge fund King Street Capital Management, one of Toshiba’s largest shareholders, last month said it planned to nominate independent directors to replace a majority of the board.

“We have received many proposals and advice through dialogue with our shareholders,” Toshiba CEO Nobuaki Kurumatani told a news conference on Monday. “We believe our selection of new directors would get their approval.”

It was unclear whether the new board would appease the fund, which had previously proposed its co-founder, Brian Higgins, to the board. Higgins was not one of the three non-Japanese named.

Toshiba, with businesses spanning power systems, semiconductors and home appliances, has faced calls to boost lackluster share performance from activist shareholders, who participated in a 600-billion-yen share issuance in late 2017.

Toshiba sees a profit of 140 billion yen ($1.28 billion) for the year to March 2020, versus 35.4 billion yen a year earlier, in line with the target the company set in its five-year plan.

The outlook compared with the 116.35 billion yen average of 16 analyst estimates compiled by Refinitiv.

Toshiba’s share price shot up after the firm announced the five-year plan in November, but has since lost 15 percent partly due to concern over the impact of Sino-U.S. trade friction. The stock, down 3.5 percent at Monday’s midday trading break, turned positive after the earnings announcement in early afternoon.

Toshiba is hoping to return to sustainable growth after conducting a number of restructuring measures last year, including the liquidation of its British nuclear power unit and sale of its laptop and television set businesses.

It is now seeking new profit generators, after the crisis linked to the bankruptcy of U.S. nuclear power unit Westinghouse forced Toshiba to sell its prized memory chip unit and left it with low-margin social infrastructure businesses.

Threatening to derail Toshiba’s turnaround is its U.S. liquefied natural gas (LNG) business, which is locked into a contract that requires Toshiba to pay a fixed processing fee for LNG over 20 years from Freeport LNG--regardless of whether Toshiba can later find buyers for the fuel at prevailing rates.