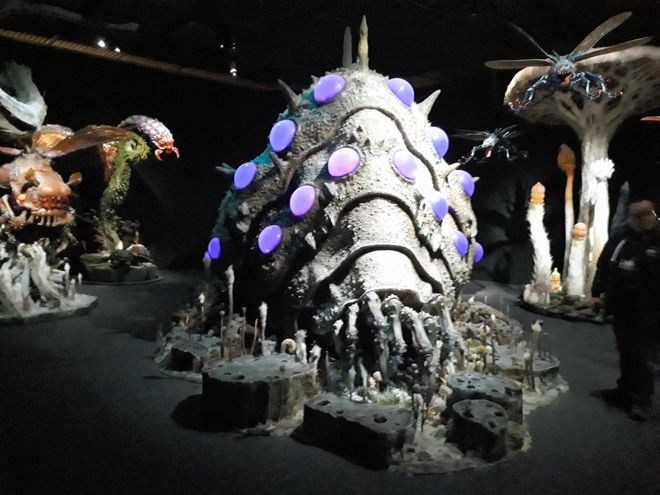 A giant model of Ohmu with glowing eyeballs. (Takashi Konishi)

The “Ghibli Expo: From Nausicaa to Marnie” art event showcases the Tokyo-based anime house’s masterpieces. One of the highlights is a large diorama re-creating the “Sea of Decay,” an enormous toxic jungle introduced in the studio’s first animated feature film released in 1984, “Nausicaa of the Valley of the Wind.”

Created by sculptor Takayuki Takeya, who served as character designer for the live-action “Shin Godzilla” film, the diorama has made its first public appearance in the prefectural capital while the exhibition is touring across Japan.

Also on display is a model of the gigantic creature called Ohmu, which is 8.5 meters long and 3.8 meters tall and whose 14 eyeballs glow red and blue. Other familiar insects include the “hebikera,” which is a centipede-like creature with a long, thin and flat body, and the large dragonfly-like “daio-yanma,” the sentry of the Sea of Decay.

The models are so realistic that visitors might be convinced that some of the creatures actually exist in real life.

Also displayed at the venue are about 3,000 items including several versions of movie posters, original drawings, project proposals and advertising materials for media publications. Particularly worthy of note should be “materials that vividly convey the behind-the-scenes of production,” according to Ghibli event producer Takayuki Aoki.

A prime example is the catchphrase for “Princess Mononoke” (1997), which is simply “Ikiro” (live). The famous tag line was hammered out by Ghibli producer and President Toshio Suzuki, director Hayao Miyazaki and copywriter Shigesato Itoi after a long and often grueling discussion between the three. Many faxed documents displayed on a wall show their strong determination and intensity to pay careful attention to advertising aimed at as many people as possible because the studio is confident in its works into which it pours its heart and soul.

In addition, the famous Cat Bus from “My Neighbor Totoro” will be on display at the venue, while Totoro welcomes visitors at a counter modeled after the real one at the studio.

The exhibition runs until June 23. The venue is closed on Mondays. Admission is 1,400 yen ($12.60) for adults and college students, 1,000 yen for junior and senior high school students and 600 yen for elementary students and children aged 4 or older.