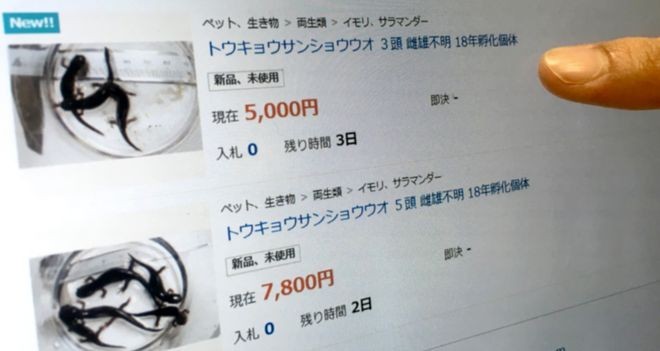 Tokyo salamanders, a species designated in “Endangered Class II” in the Environment Ministry’s Red List, are sold on a website. (Yu Kotsubo)

The population of the endangered Tokyo salamander is being further depleted by a modern foe: online shopping.

Salamander eggs and rare animals are increasingly being sold over the Internet, drawing warnings from environmentalists that ecosystems in Japan could be irreparably damaged by the trend.

But freshwater fish species, amphibians and other creatures not listed in the law or covered by regulations can be sold.

And the Environment Ministry’s Red List has no legal basis to stop individuals from selling species that it considers endangered.

Some local communities and Internet shopping sites have introduced restrictions to protect endangered species and the environment.

But overhunting and online sales continue, and experts say that if nothing is done soon, it may be too late.

The Tokyo salamander, which inhabits mountain areas near human settlements, is one of the species recognized as endangered on the ministry’s Red List.

But that did not stop someone from offering many Tokyo salamander eggs on an online shopping site in March.

A Twitter user criticized the seller, posting: “Don't be ridiculous. Collecting so many eggs must have caused fatal damage to the local ecology.”

The post was retweeted more than 9,000 times and drew many comments, such as, “The seller has gone too far” and “Even just seeing them on sale is pitiful.”

In an interview with The Asahi Shimbun, the Twitter user said, “It is really regrettable that some people engage in overhunting of endangered animals for their own benefit, destroying local ecosystems in mountain regions.”

Yoichi Kawakami, an official of the secretariat of the Tokyo salamander study society who is involved in the protection and research of the species, views online sales of salamander eggs as problematic.

“As people in nearby communities enter mountain areas less frequently, more raccoons and other non-native predators now live in the (salamanders’) habitat, making their situation even worse,” Kawakami said. “Overhunting of eggs would deliver the final fatal blow to them.”

Kawakami said that around 10 years ago, many salamander eggs were frequently taken from the Yokosawa Irisatoyama preservation zone in Tokyo’s Akiruno, where Kawakami engages in conservation efforts.

But the situation for the amphibians improved after an ordinance was introduced to penalize those who collect many eggs and citizen patrols started in the zone to protect the environment.

“Cooperation between authorities and citizens has been established, lowering the risk of eggs being stolen,” Kawakami said.

But few regions have taken such countermeasures.

Kawakami said many egg masses are still collected for sale in Chiba Prefecture and elsewhere.

He warned that excessive egg hunting could wipe out the amphibians.

Another problem that is already affecting local ecosystems are online sales of non-native species.

If purchased alien species are set loose or escape from their owners, they could crossbreed with native species that may have different genetic characteristics.

And if nonnative species have no natural predators in Japan, their populations could explode and wreak havoc on local animals.

For example, an invasive freshwater fish species called the rosy bitterling that can easily be bought online has now spread across Japan.

The Asahi Shimbun asked four leading shopping site operators about how they handle sales of animals.

Mercari Inc. said it bans trades of any living creature on its website.

Yahoo Japan Corp., Rakuten Inc. and the Japanese subsidiary of Amazon.com Inc. said they prohibit trade in mammals, birds, reptiles and other animals whose sales are banned by law.

However, endangered amphibians and alien freshwater fish were confirmed available on their sites.

Asked whether the company’s animal sales policy will be revised, a Yahoo Japan official said, “We will work with relevant ministries and agencies to consider countermeasures, taking into account the effects on species preservation and ecosystems.”

Rakuten also vowed to “weigh various steps, including the introduction of guidelines (on animal sales).”

Amazon simply noted that “almost all living creatures are prohibited from sales.”

Online sales of living creatures have drawn harsh criticism around the world at a time when conserving biodiversity and meeting the U.N. Sustainable Development Goals (SDGs) are increasingly viewed as important global challenges.

Portugal in 2017, for example, enacted a law that bans online trades of wild animals.

“Companies need to actively display a definite stance toward the handling of endangered species and invasive alien animals, such as voluntarily stopping sales of those species,” said Nakajima, an expert in loaches and biodiversity preservation.

He said consumers should also do their part.

“Buying endangered animals without due consideration is not good from the viewpoint of moral and natural conservation because it leads to overhunting in their habitats,” Nakajima said. “In addition, buyers of the living creatures must continue keeping the animals until they die.”