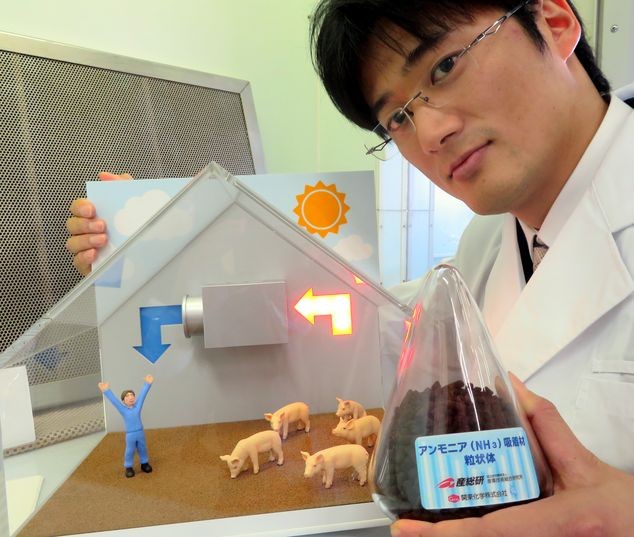 Akira Takahashi, a senior researcher at the National Institute of Advanced Industrial Science and Technology, poses with a vial of the new adsorbent and a miniature model of an ammonia adsorption device that uses it to cut odors in pigpens, in Tsukuba, Ibaraki Prefecture. (Shinichi Mishima)

TSUKUBA, Ibaraki Prefecture--A substance developed here to remove ammonia from the air packs such a powerful punch it can cut the foul odor that wafts from pigpens.

The adsorbent, which enables airborne ammonia to adhere to its surface, is five to 100 times more effective than existing materials with similar properties, including activated carbon, researchers said.

Animal waste is one source of ammonia, a colorless gas which is harmful to human health in high concentrations.

One application would be for clean environments such as those used in the manufacturing of semiconductors.

Senior AIST researcher Akira Takahashi and his colleagues said they produced CuHCF by replacing half of the iron ions in the pigment Prussian blue with copper ions.

The group initially drew on that property to develop an adsorbent for radioactive cesium that spewed from the Fukushima No. 1 nuclear power plant after the triple meltdown in March 2011.

Prussian blue adsorbs various molecules and ions into the gaps of its grid-like structure.

The researchers subsequently replaced iron ions with various other metal ions to study changes in the properties. The ammonia adsorbent emerged during that process, they said.

A single gram of CuHCF was found to adsorb 100 times more ammonia than a gram of activated carbon, and five times the amount of ammonia adsorbed by a gram of ion exchange resin, the scientists said.

The team put granulated CuHCF into a plate-shaped case 60 centimeters tall, 50 cm wide and 5 cm thick to make an adsorption device, which they operated in an airtight pigpen containing 40 pigs. The pigpen stank a lot less when they ran the device than when no adsorption device was installed, the researchers said.

The adsorption filter can be used repeatedly if it is washed with an acidic solution, the researchers added.

The high cost of producing it remains a major challenge.

“The substance currently costs around 100,000 yen ($900) per kilogram,” Takahashi said. “We hope mass production will bring it down to several thousand yen.”