EDITORIAL: Nuclear powers should lead world toward a mood for disarmament 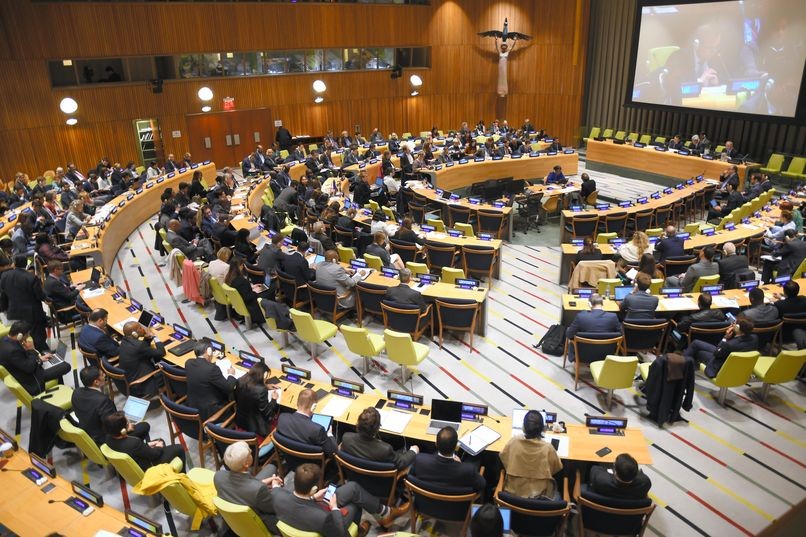 The preparatory committee for the 2020 Nuclear Non-Proliferation Treaty review conference holds a session in the United Nations headquarters in New York on May 10. (Asahi Shimbun file photo)

The world’s efforts to build a future without nuclear weapons are now at a critical juncture. Strong countervailing winds are blowing against the long-established international framework for promoting nuclear arms reductions through international treaties.

The core of this framework is the Nuclear Non-Proliferation Treaty (NPT), a landmark international treaty to prevent the spread of nuclear arms. A meeting was recently held at the United Nations headquarters to prepare for the 2020 review conference of the treaty, which will mark the 50th anniversary of its enforcement.

But the meeting failed to work out a draft text to be used in discussions for the review conference as the rift between the nuclear powers and countries without nuclear arms remains as wide as ever.

The leaders of the United States and Russia, which together account for more than 90 percent of all the nuclear arms on Earth, have even shown their ambitions to beef up their countries’ nuclear arsenals.

The foreign ministers of the two countries held talks on May 14 without making any notable progress for the promotion of nuclear disarmament. They only referred to the establishment of a working group on nuclear arms reductions.

The current situation will only further worsen the prospects for nuclear arms reduction.

If next year’s NPT review conference, an event held every five years, fails to reach any agreement as did the previous one, the nuclear non-proliferation regime will fall into a serious crisis.

In a world where the threats of nuclear arms are rampant, all nations must confront the reality that even the most powerful countries cannot establish a viable security policy focused only on their national interests.

The division between nuclear and non-nuclear countries has entered a new stage because of the Treaty on the Prohibition of Nuclear Weapons, the first legally binding international agreement to ban nuclear arms, which was adopted by the United Nations in 2017.

In the preparatory meeting earlier this month, the United States and some other nuclear powers opposed the attempt to note broad support for the treaty in the draft text, arguing such a statement would cause a division among countries.

Such arguments by nuclear powers are totally unconvincing because they have been failing to honor the obligation to reduce their nuclear stockpiles imposed by the NPT.

Washington and Moscow have decided to withdraw from the 1987 Intermediate-Range Nuclear Forces Treaty, a key nuclear arms treaty signed in the waning years of the Cold War, which prohibited land-based missiles with relatively short ranges.

The two countries have a separate treaty to reduce strategic nuclear weapons. But the future of this treaty after its expiration in two years remains unclear.

There are some voices that are sounding the alarm about the trend. Three of the four wise men of the U.S. foreign policy establishment who called for the elimination of nuclear weapons in 2007--former Secretary of State George Shultz, former Defense Secretary William Perry and former U.S. Senator Sam Nunn--in April published a joint op-ed warning about the situation.

They argued that the United States should pour greater effort into negotiations with Russia to prevent a nuclear catastrophe.

For the time being, the governments of the United States and Russia should focus on efforts to accelerate bilateral talks to extend the treaty to reduce strategic nuclear arms.

It is also necessary for the two nuclear superpowers to take steps to boost the effectiveness of the nuclear arms control regime in response to changes in the times while respecting the disarmament rules from the Cold War era.

The biggest change in the global security landscape has been, as U.S. President Donald Trump has pointed out, China’s rise as a major military power.

So far, China has refused to accept any restriction on its nuclear ambitions. It is vital to prod Beijing into changing this stance as part of the long-term efforts to build a comprehensive framework for nuclear arms reductions covering all nuclear powers.

This requires both Washington and Moscow to make a solid commitment to their bilateral treaties to cut their nuclear arsenals.

The Japanese government has been trying to play the self-appointed role of being a bridge between the nuclear and non-nuclear camps.

As long as it keeps turning its back on the new nuclear ban treaty, however, Japan cannot claim that it is performing this role.

Tokyo should work hard to build a consensus among countries including the United States to ensure that the erosion of the nuclear disarmament and arms control framework will be stopped at the NPT review conference next year.