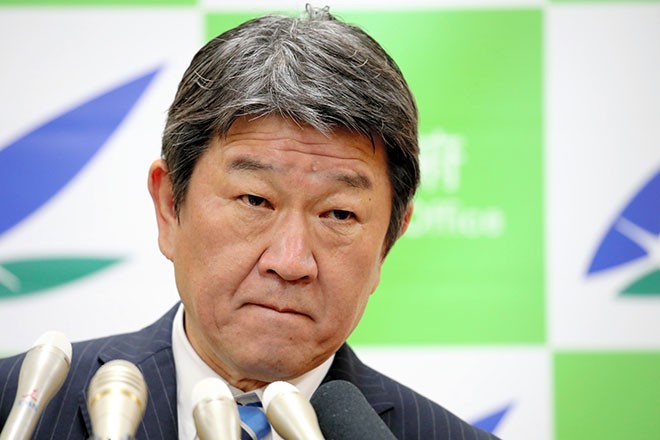 Toshimitsu Motegi, the state minister in charge of economic revitalization, responds to questions at a May 20 news conference. (Kazuhiro Nagashima)

The unexpected 0.5-percent increase in real gross domestic product in the January-March quarter might silence opponents of the scheduled consumption tax rate hike, but economists warn that the nation’s economy remains far from robust.

The quarter-to-quarter figure, reported on May 20, translates to an annual growth rate of 2.1 percent.

Japan’s GDP had been forecast to remain unchanged or even decrease slightly.

However, Shinke cautioned that the latest figures do not reflect the actual condition of the economy.

“The growth rate was pushed up strongly due to a decrease in imports, but that is only a reflection of weak domestic demand,” he said. “It is not a situation over which we should be rejoicing.”

External demand in GDP statistics is calculated by subtracting imports from exports.

Both import and export figures decreased in the first quarter, but imports fell at a much greater rate, leading to a large positive figure for external demand. That contributed to the overall growth of GDP.

The decline in imports is believed to reflect sluggish plant and equipment investment by companies. Such investment is a pillar of domestic demand.

Moreover, personal consumption, which makes up more than half of GDP, dropped by 0.1 percent in the January-March quarter, the second straight quarter of decline.

The decrease can be attributed to belt-tightening among households as the price of food and other products has risen in recent months.

The strong GDP figures should come as welcome relief for government officials who want to raise the consumption tax rate from the current 8 percent to 10 percent in October.

At a May 20 news conference concerning the latest GDP figures, Toshimitsu Motegi, the state minister in charge of economic revitalization, said there was no change in the government’s plan to raise the tax rate in October.

Some politicians have warned of disaster if the tax rate is raised while the economy is struggling.

Finance Ministry officials said the unexpectedly positive GDP figures would now make it more difficult for such opponents to call for another postponement in the tax hike.

But other economists say the overall picture does not bode well for long-term GDP growth.

Taro Saito, who heads the Economic Research Department at the NLI Research Institute, is forecasting a 0.2-percent decrease in GDP for the April to June quarter. That would translate to a 0.8-percent drop for the entire year.

He said there was a strong possibility that external demand in the second quarter would be negative because exports remain stagnant due in part to the ongoing trade row between the United States and China.

Saito added that there would likely be a rebound in imports because of the sharp decline in the first quarter.

“With plant and equipment investment likely to continue showing a small rate of decrease, the Japanese economy will likely continue progressing at a low level of growth,” he said.