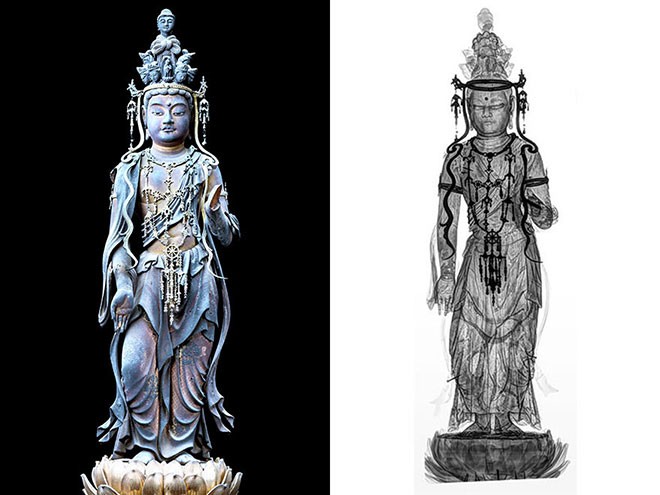 On the left is the standing statue of the Eleven-faced Kannon at Takisanji temple in Okazaki, Aichi Prefecture. (Provided by Takao Oya). An X-ray image revealed three scrolls inside the leg portion of the statue. (Provided by a group of experts researching works of Kaikei)

OKAZAKI, Aichi Prefecture--An ancient statue of the goddess of mercy owned by a Buddhist temple here bears all the hallmarks of having been created by Kaikei, an outstanding sculptor of the Kamakura Period (1185-1333), or a disciple, experts say.

Atsushi Aoki, a professor of Japanese art history at Tama Art University in Tokyo, said May 20 that the standing sculpture of the Eleven-faced Kannon at Takisanji temple is similar to other early works by Kaikei, citing the results of X-ray and other analysis.

Kaikei, who lived from the late 12th century to the early 13th century, is famed for creating Buddhist statues at Todaiji temple in Nara.

Kaikei’s works are known for being realistic and more graceful and elegant than those produced by other members of the Kei School to which he belonged.

The Eleven-faced Kannon is mounted on a pedestal and stands about 50 centimeters tall. The body and the base are decorated in gold leaf.

A publication on the history of Aichi Prefecture compiled by the prefectural government states that the sculpture, made of a needle-leaved tree--most likely Japanese cypress--was created during the Kamakura Period.

But it was not known who sculpted the statue, according to Ryosei Yamada, chief priest of the temple that dates from the seventh century.

Aoki embarked on a two-year study to X-ray 20 or so Buddhist statues and other sculptures around Japan that are believed to be works by Kaikei. Many of his creations are recognized as cultural properties of varying degrees.

During this process, Aoki examined the standing statue of the Eleven-faced Kannon, which is not designated by the central government as a cultural property.

The findings showed that a recess at the back of the statue’s head to place offerings inside the body was similar to other examples attributed to Kaikei.

An X-ray image also showed three 8-centimeter long scrolls inside the leg portion of the sculpture, another feature common to Kaikei’s works.

Aoki said these characteristics suggest that the statue was created by Kaikei or a sculptor in his studio.

“It was so exciting to peek into the inside of the sculpture. It was like a time capsule,” he said.

Tomoji Iwai, a researcher of the history of Buddhist statues at the Nara National Museum in Nara, noted that many experts have long suspected that the statue very likely had been carved by Kaikei or a sculptor from his studio.

“The value of the statue as cultural property is bound to surge,” Iwai said. “More research will be needed to pin down other works of artists who have a connection to Kaikei.”