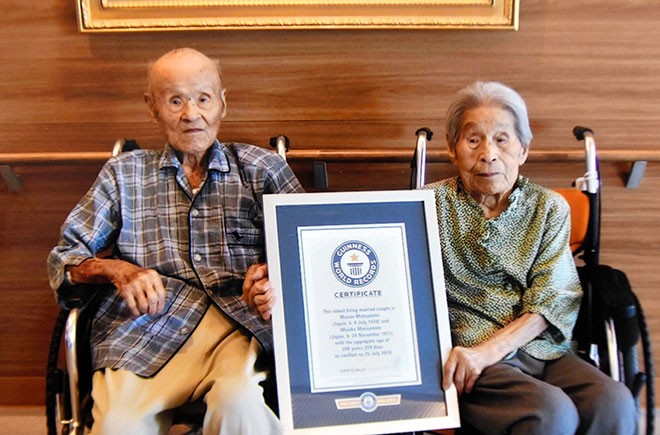 Masao Matsumoto, left, and his wife, Miyako, when they were officially recognized as the oldest living married couple by the Guinness Book of World Records in 2018. (Provided by Matsumoto’s family)

After more than eight decades of marriage, death will finally part Masao Matsumoto from his better half, Miyako, who were recognized as the world's oldest living married couple by the Guinness Book of World Records in 2018.

Matsumoto died from heart failure at a nursing home in Takamatsu, Kagawa Prefecture, on May 17. He was 108.

He leaves behind his loving wife of 82 years, Miyako, age 101, and five daughters.

In July 2018, the Guinness Book of World Records listed him and Miyako, then age 100, as the oldest living married couple, with their combined age of 208 years and 259 days at the time.

All their daughters were by his bedside when Matsumoto died, according to his eldest daughter, Etsuko Kitamura, 78.

“My father lived through five different eras starting from Meiji,” said his 76-year-old second daughter, Chizuyo Mano. “I think he spent a happy life. I'd say 'Bravo!' to him.”

Being recognized by Guinness had a positive effect on Matsumoto's health, said Hiromi Sano, 67, his youngest daughter.

After going through a period when he didn't feel like eating, Matsumoto's appetite awoke after he learned that the couple was listed in the Guinness records, she recalled.

“He was delighted to be able to live long enough to witness the new Reiwa Era. I'm so proud of him for accomplishing everything,” said Sano.