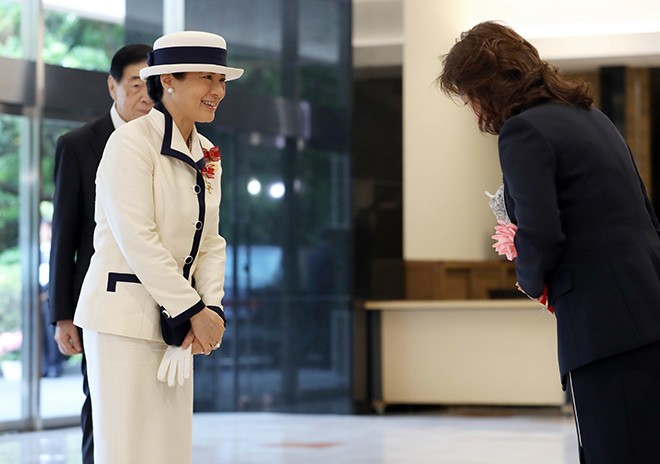 Masako, who replaced Empress Emerita Michiko as honorary president of the society, appeared at the meeting in front of about 1,900 people, including supporters of Red Cross activities.

She presented awards to four organizations and nine people who have continuously provided support to the society.

The empress also listened to a report from doctors and others who worked as health care coordinators during the deadly flooding disaster caused by heavy rain that hit western Japan last summer.

Other female members of the imperial family, including Crown Princess Kiko, attended the meeting.

Masako had not participated in the awards presentation since the society’s National Conference for Promoting Blood Donation in July 2003, shortly before she took a long rest at home to deal with an “adjustment disorder.”

Since the end of World War II, Japan’s empress has traditionally served as honorary president of the Japanese Red Cross Society, which has a connection with the imperial family.

Masako attended the society’s 2018 annual meeting for the first time in 15 years, and then Empress Michiko introduced Masako on stage.