VOX POPULI: Best way for men to beat summer’s brutal heat may be with a parasol 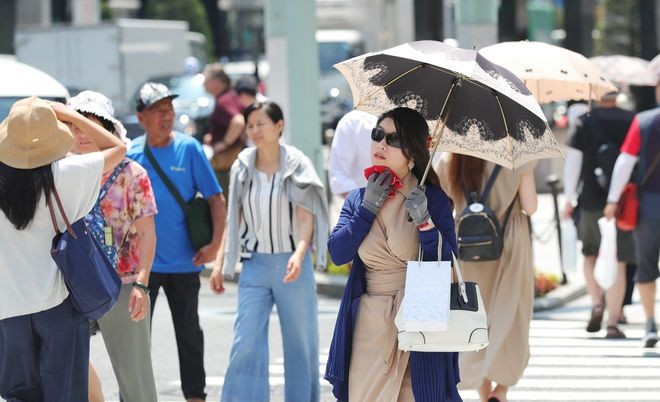 A passer-by shades herself with a parasol in the Ginza district of Tokyo. (Asahi Shimbun file photo)

A parasol can bring some relief on a hot summer day.

Shading oneself from the sun's merciless glare with one has long been a female custom in Japan.

But during the latter half of the Edo Period (1603-1867), some men apparently came to think that they, too, should be allowed to embrace the tradition.

Thus, sporting a white parasol became all the rage among samurai, merchants, tradesmen, and so forth.

But the Edo "Bakufu" government quickly put a stop to this.

According to "Edo Jidai 265-nen Nyusu Jiten" (Encyclopedia of news during the 265 years of the Edo Period), the government banned all males, with the sole exception of doctors, from using a parasol.

The stated reason was to "promote thrift." But perhaps the prevalent feeling in society back then was that a parasol didn't quite match the masculine image associated with the samurai class.

In any case, the government ban solidified the perception that parasols are for women only.

But finally, this may change. Or maybe not.

In its latest campaign, the Environment Ministry is urging men to use a parasol as protection against heatstroke. According to clinical data released by the ministry, people sweat 17 percent less than when they wear a hat.

In fact, the expression "higasa danshi" (parasol man) became a buzzword a few years ago.

My recollection is that people were initially encouraged to use a parasol to minimize sun damage to the skin. But more recently, the emphasis has shifted to preventing heat illnesses.

With the international community struggling unsuccessfully to curb global warming, it appears that we now need to resort to whatever protective measure we can take in our daily lives.

A trip to a department store revealed that its men's umbrella section was stocked with parasols for men. I decided to give it a try and bought a cream-colored one.

When I opened it on the street, I did feel its cooling effect. But to be quite honest, I felt uncomfortable about getting into the habit of using it.

It wasn't that I was embarrassed as a man, as I have always believed myself to be a gender-neutral thinker. But I don't know...

According to recent media reports, the Tokyo Junior Football League is moving toward canceling regular games during the school summer holiday period.

Japan's summer heat has become so brutal of late, it's no longer possible to stick to traditional customs and what used to pass as "common sense" to cope with it.

This weekend, the mercury is forecast to soar above 30 degrees in various parts of Japan.