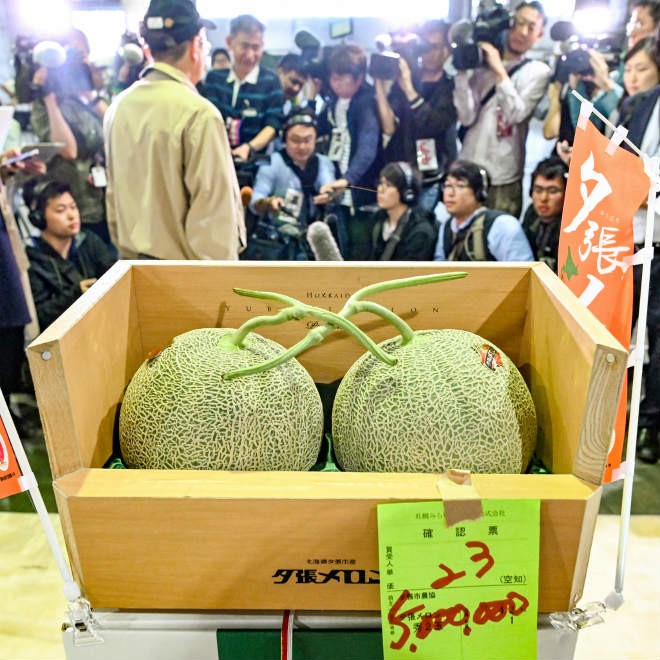 A winning bid of 5 million yen was offered for Yubari melons at the Sapporo Central Wholesale Market in Sapporo’s Chuo Ward on May 24. (Nobuhiro Shirai)

SAPPORO--A pair of Yubari melons were sold for 5 million yen ($45,600), a record bid that drew gasps even among an auction crowd long used to sky-high prices for the prized fruit.

The winning bid for the two-melon box at the Sapporo Central Wholesale Market on May 24 far exceeded the previous record of 3.2 million yen set last year.

Yubari melons, known for their high sugar content, are a specialty fruit harvested in Yubari, Hokkaido, a city that has had a history of struggles since it coal mine was closed in 1990.

The year’s first auction for the melons was over almost immediately after it started at 7 a.m.

A person raised his hand and opened the bidding: “5 million yen.”

Others at the auction whispered, “Really?” A crowd formed to confirm that 5 million yen was the actual price offered.

The bidder was an employee of Pokka Sapporo Food & Beverage Ltd., which has been selling Yubari melon-flavored soda for 10 years. The auction was the first for the company.

“This is the first auction since the era name became Reiwa,” said Yoshihiro Iwata, 57, president of the company. “We also wanted to show our appreciation to the farmers of Yubari melons.”

The melons will be displayed on the second-floor lobby of New Chitose Airport for four days from May 26.

After that, the company will analyze the scent and color of the melons for product development.

Yubari Mayor Tsukasa Atsuya, who attended the auction, said; “We received an honorable price and a high evaluation of Yubari farmers. We want to protect the melon as our city’s asset to revitalize the city.”