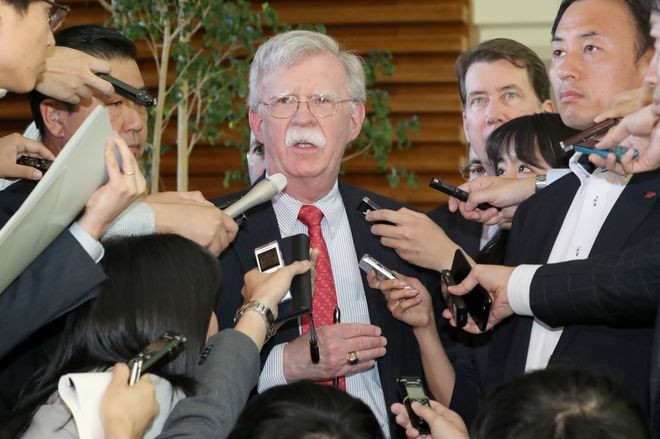 National Security Adviser John Bolton speaks to reporters on May 24 at the prime minister’s office in Tokyo.(The Asahi Shimbun)

It was the first time a senior U.S. official has described the tests as a violation of U.N. resolutions aimed at halting North Korea's nuclear and missile programmes and came ahead of a four-day visit to Japan by U.S. President Donald Trump who arrives later in the day.

"The U.N. resolution prohibits the launch of any ballistic missiles," Bolton said at a press roundtable. North Korea's test firings included short range ballistic missiles and so there was "no doubt" it was a violation, he added.

Earlier this month, Kim Jong Un oversaw the first flight of a previously untested weapon - a relatively small, fast missile experts believe will be easier to hide, launch and manoeuvre in flight.

Bolton said that the United States was still open to talks with Kim's regime but that it had not changed its position from the one outlined at the last summit between the United States and North Korea in Hanoi.

"Trump has held the door open for Kim, the next step is for Kim to walk through it," he said.

An Abe Kim summit "could be substantive assistance to that", he said.

Trump, who will play golf with Abe on Sunday before watching Sumo wrestling, is expected to discuss topics ranging from North Korea to China and two-way trade when they sit down for a summit on Monday.

The two leaders will also discuss rising tensions with Iran, Bolton said. Abe is considering a visit to Iran as early as mid-June, public broadcaster NHK said on Friday, the first such trip in four decades.

Washington has said it will stop waivers for countries buying Iranian oil and has designated Iran’s elite Revolutionary Guard Corps as a foreign terrorist organisation.

The United State is also deploying a carrier strike group and bombers to the Middle East in response to what the Trump administration described as troubling “indications and warnings” from Iran.

Bolton, who has spearheaded an increasingly hawkish U.S. policy on Iran, described recent attacks on tankers off the United Arab Emirates and a pipeline pumping station in Saudi Arabia, as well as a rocket attack in Baghdad’s Green Zone in Iraq, as "manifestations of concern".

The United States has "deep and serious" intelligence on the threat posed by Iran, said Bolton, who declined to provide details.