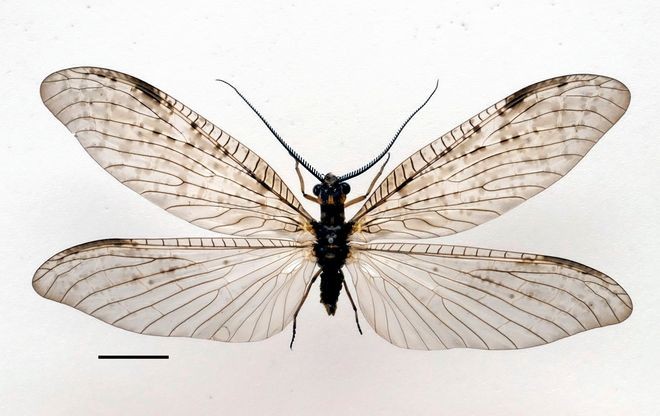 An office worker has followed in his father’s footsteps by discovering a new fishfly species in Kyushu’s woodlands.

Mitsuru Shimonoya, 54, from Tokyo’s Meguro Ward, has published a report on his discovery of Parachauliodes rastellus in the scientific journal Zootaxa.

Fishflies are aquatic insects with large jaws in both the larvae and adults stages. They undergo the pupae stage before they turn into imagoes, unlike dragonflies, which emerge directly from naiads.

Adult fishflies have a wingspan of about 10 centimeters.

The Japanese name for Parachauliodes rastellus contains the word “Chikushi,” an old name for an area in today’s Fukuoka Prefecture, where samples of the species were caught.

The Japanese name is also intended to evoke the phrase “chiisana kushi” (small comb), which describes the appearance of the insect’s antennae.

Mitsuru’s father, Toyokazu, now 78, discovered a new fishfly species about 25 years ago in Fukui Prefecture, but he could not publish his findings because of health problems.

Mitsuru came to his aid, which allowed Toyokazu to publish a paper in 2015 on the discovery of Parachauliodes inopinatus.

“My father used to hunt for bugs as a hobby,” Mitsuru said. “I had no hobby myself, but my experience in helping out my father taught me in-depth knowledge, which allowed me to discover the other new species.”

Toyokazu gave his discovery a Japanese name that includes the word “kakure” (hiding) because adults of the species are averse to light.

When Mitsuru made the rounds of different areas to study the distribution of fishflies, he discovered his new species in Saga Prefecture in May 2017. He also spotted the same species in Fukuoka Prefecture. Both locations were close to human habitats.

“It is really surprising that a father-and-son pair of amateur researchers have discovered in Japan new species of large-size insects, which look like bugs from ‘Nausicaa of the Valley of the Wind,’” said Masaya Yago, an assistant professor of the natural history of insects with the University Museum of the University of Tokyo, referring to Hayao Miyazaki’s anime film that was released in 1984.

Mitsuru’s photograph of a fishfly decorated the Zootaxa journal’s website for some time.