EDITORIAL: Japan should snuff out reliance on coal-fired thermal power 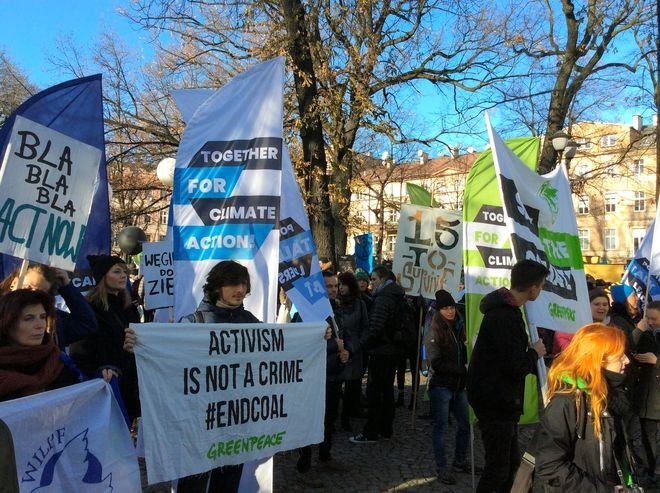 Protesters hold up signs outside the venue for the United Nations conference on climate change in Katowice, Poland, in December. (Asahi Shimbun file photo)

The Environment Ministry has decided to take a tougher stance in assessing the environmental impact of coal-fired thermal power stations.

The ministry will call upon operators to discontinue plans to build new coal-fired thermal plants or plant units unless those operators present a pathway for reducing carbon dioxide (CO2) emissions.

Following the ministry’s announcement of the decision, Osaka Gas Co. said it was withdrawing from a plan to build a new coal-fired thermal power station in Yamaguchi Prefecture.

Japan should solidify this trend for going coal-free.

Even a state-of-the-art, coal-fired thermal power plant unit emits twice as much CO2 as a natural gas-fired counterpart in generating the same amount of electric power. Given the current need for tougher measures against global warming, it is all too natural for the brakes to be applied on building new coal-fired thermal plants and plant units.

The ministry of trade and industry, which holds the right to license and approve power plants, should also keep step with the Environment Ministry.

Plans that have gone through the stage of environmental assessment should also be reviewed.

A number of plans were worked out, in the wake of the Fukushima nuclear disaster of 2011, to build new coal-fired thermal plants and plant units. Plans for building 25 such plant units remain active, according to figures of the Kiko Network, a non-government body dedicated to environmental issues.

Most of those plans have already gone through environmental assessment procedures, so they are expected to be put into effect unless they are called off by their operators.

A low cost is the factor behind the operators’ reliance on coal-fired thermal power. To prompt a shift from that state of things, it is essential to introduce a mechanism of carbon pricing, such as a carbon tax and emissions trading, in earnest, so that social costs of CO2 emissions are duly reflected in the prices.

Different nations of the world have long worked on the research and development of CCS and CCU, but they have yet to overcome problems of those technologies, including their high costs.

Japan will have a slim chance of achieving the ambitious goals of the Paris Agreement, which set international rules for fighting global warming, as long as the country continues to use coal-fired thermal power while counting on technologies whose feasibility remains anything but certain.

Many countries have already set out on a path toward a future free of coal.

Britain, France, Italy, Canada and other countries have plans to totally withdraw from coal-fired thermal power generation between the 2020s and 2030. Germany is also shifting toward going coal-free.

Figures of the Renewable Energy Institute show that 20 of the 36 member countries of the Organization for Economic Cooperation and Development are either considering scaling down, or have a plan to totally withdraw from, coal-fired thermal power generation.

As things now stand, coal-fired thermal power accounts for more than 30 percent of Japan’s energy mix. Its share will remain at 26 percent in 2030, according to a government blueprint.

Japan is internationally ill-reputed for being negative about going coal-free, all the more because the country is exporting coal-fired thermal power generation technologies to Southeast Asia.

Last month, Tokyo released a draft long-term strategy for fighting global warming, which says Japan will “seek to realize a carbon-free society at the earliest date possible in the latter half of this century.”

The draft failed to include any plans for a total withdrawal from coal-fired thermal power because of opposition from business circles. There is a need, however, to stop building new coal-fired thermal plants and plant units and phase out the existing ones.

Japan should take a bold step toward a coal-free energy policy.