Polish visitor, 3 others quizzed over illegal drone flights in Tokyo 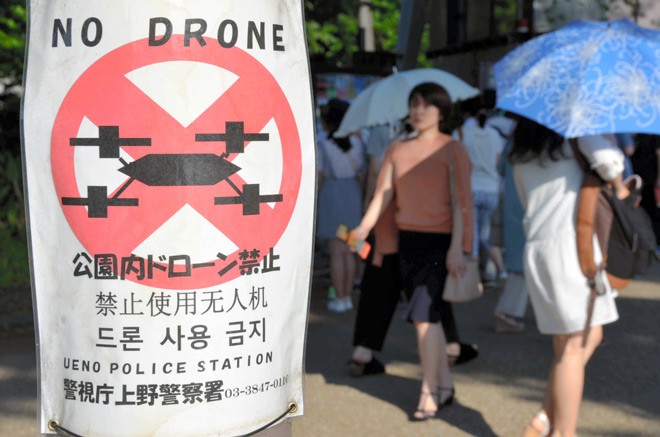 A Polish tourist was among four people questioned by Tokyo police on suspicion of operating drones without permission. In one incident, a drone crashed into a facility for people with disabilities in the capital's Adachi Ward, but there were no injuries.

The Metropolitan Police Department said May 27 they referred three of the cases to prosecutors without arresting the suspects.

Takashi Kaga, a resident of Tokyo's Edogawa Ward who listed his occupation as demolition worker, was arrested after operating a 470-gram drone in a park in the ward where high school students had gathered and been playing.

"My intention was to show them a drone in flight," Kaga, 52, was quoted by police as saying.

Police said they decided to arrest him because he was not cooperative during voluntary questioning.

A 64-year-old company employee was also questioned by police after his unmanned craft crashed into the premises of a facility for people with disabilities. Police referred his case to prosecutors as well.

Police said the four men operated their drones in no-fly zones from March to May even though they did not have special permission to do so. Police said their actions were in violation of the Aviation Law.

“There could have been a huge problem if it had hit one of our residents," said the 46-year-old male director of the facility. He said the drone weighed about 800 grams and measured approximately 30 centimeters square.

Police said a 25-year-old university student visiting from Poland was also suspected of illegally operating a drone in Ueno Park in the capital's Taito Ward while it was packed with cherry blossom viewers.

“I just wanted to shoot Japanese cherry blossoms,” he told police, added that he was visiting Japan for sightseeing.

A 58-year-old company employee was also questioned by police, but no details were available. However, police said they had referred the case to prosecutors.

Drone operators are obliged to submit an application in advance to the transport minister for permission to fly the craft over densely populated areas, such all 23 wards of Tokyo, or risk falling afoul of the Aviation Law.

(This article was written by Chihaya Inagaki and Yuko Kawasaki.)