A man went on a stabbing rampage at a bus stop for elementary school children in Kawasaki on the morning of May 28. Two people died and the suspect killed himself. (Video footage by Takahiro Kumakura) 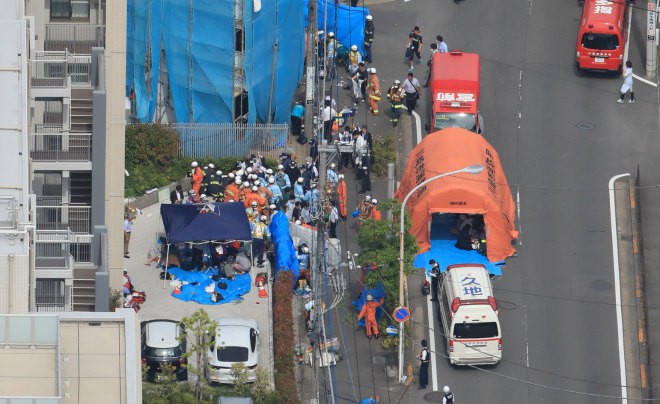 Eighteen people, including many elementary school children, were stabbed in Kawasaki on May 28. (Hikaru Uchida)

KAWASAKI--An 11-year-old girl, a 39-year-old man and a suspect died following a stabbing rampage at a bus stop for elementary school children on May 28 that left 16 others injured.

The suspect, believed to be a 51-year-old resident of Kawasaki’s Asao Ward, died of self-inflicted injuries, Kanagawa prefectural police said.

Police identified the girl as Hanako Kuribayashi, who lived in the Tama area of Tokyo. The dead man is Satoshi Oyama, an employee of the Foreign Ministry from Tokyo’s Setagaya Ward.

Two other children and a woman in her 40s were listed in serious condition, police said.

The attack occurred around 7:40 a.m. in Kawasaki’s Tama Ward when pupils of Caritas Elementary School, a private school in the same ward, were waiting for their bus to arrive.

According to sources, Oyama is the father of a pupil who attended the school, but his child was not injured in the attack.

A 57-year-old office worker said he saw a middle-age man swinging knives and yelling, “I will kill you!” on the street near the bus stop.

The children were screaming in terror, he said.

A 52-year-old taxi driver who lives nearby said he went outside and heard police sirens and cars honking their horns.

“Many people were on the ground in front of a convenience store,” he said. “Rescue workers were performing cardiopulmonary resuscitation on adults who were bleeding and lying on their backs. A boy in shorts, likely an elementary school pupil, was being carried away by stretcher.”

He said he also saw terrified-looking children still carrying their “randoseru” school bags and a woman wandering around the site saying, “I can’t find my child.”

A 60-year-old man said he rushed to the scene and talked to a visibly upset school bus driver.

“I looked toward the bus stop when I heard kids screaming,” the man quoted the bus driver as saying. “I saw a man holding two long knives in each hand. Afterward, he stabbed himself in the neck and fell down.”

According to investigative sources, the driver of a Caritas school bus shouted at the suspect, “What are you doing?”

The assailant then left the scene and stabbed himself. A backpack found there contained two other knives, investigators said.

The site is located in a residential area about 250 meters west of Noborito Station in Noboritoshinmachi.

Police said a woman made an emergency call in the morning, saying: “Someone’s attacking people in Noborito. He looks like he’s in his 40s or 50s.”

Kanagawa prefectural police have set up a murder investigation headquarters.