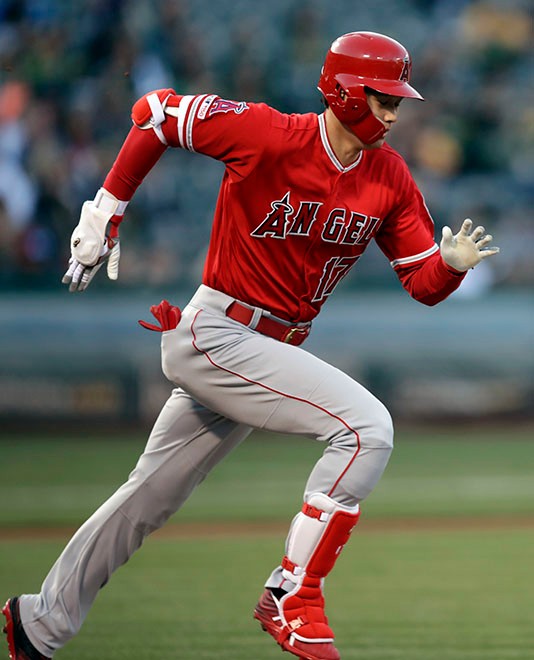 Los Angeles Angels' Shohei Ohtani runs on a ground out in the first inning of a baseball game against the Oakland Athletics onn May 28 in Oakland, California. (AP Photo)

OAKLAND, California--Joakim Soria took issue with a 1-2 curveball he believed should have been strike three to Shohei Ohtani, who two pitches later lined a go-ahead single and Oakland's best winning streak in 13 years had all but ended.

Ohtani hit the tiebreaking two-run single with two outs in the ninth inning, and the Los Angeles Angels snapped the Athletics' 10-game winning streak with a 6-4 victory Tuesday night.

The Angels went ahead in the top of the ninth when Tommy LaStella singled with two outs and Mike Trout walked. They advanced on Soria's wild pitch. Ohtani got the hit and when the inning ended Soria immediately went to home plate and yelled in the face of umpire James Hoye and was ejected. A's manager Bob Melvin then came out to speak with Hoye, with Melvin saying later "it's a tough way to lose."

"It was a really close pitch. I think it could have gone either way," Ohtani said through interpreter Ippei Mizuhara. "The umpire called it a ball and whatever the umpire says goes. Sometimes I'll get the wrong end of it. Today I guess I got the better end of it."

Ty Buttrey (3-2) recorded four outs for the win then Hansel Robles finished for his sixth save.

Liam Hendriks struck out four over two perfect innings, including striking out the side in order in the eighth, before Soria (1-4) entered and gave it up.

Matt Olson hit a tying two-run homer in the sixth for one of three longballs hit by Oakland for a second straight night. Marcus Semien homered on the first pitch leading off the bottom of the first off Angels opener Cam Bedrosian before Los Angeles answered immediately against Frankie Montas.

Ramon Laureano homered leading off the fifth. That extended his career-high and A's season-best hitting streak to 11 games.

Wei-Chung Wang relieved Montas to start the fifth for his first major league appearance since Sept. 27, 2017, with the Brewers. He worked two scoreless innings.

The Angels used Bedrosian before turning the game over to Nick Tropeano, called up from Triple-A Salt Lake to make his 2019 debut. The right-hander allowed three runs on five hits in five innings with four strikeouts and two walks.

Oakland had a suspended game in the middle of its streak on May 19 at Detroit. The A's are ahead 5-3 in the bottom of the seventh and if they end up winning when it resumes Sept. 6, the winning streak will stand at 10 games. If the Tigers come back, this recent streak will officially be counted as a seven-gamer.

Stephen Piscotty singled in the fourth and has now reached base safely in 24 straight games, a new career high topping the 23 he set in 2018.