Japan to toughen screenings of seafood imports from S. Korea 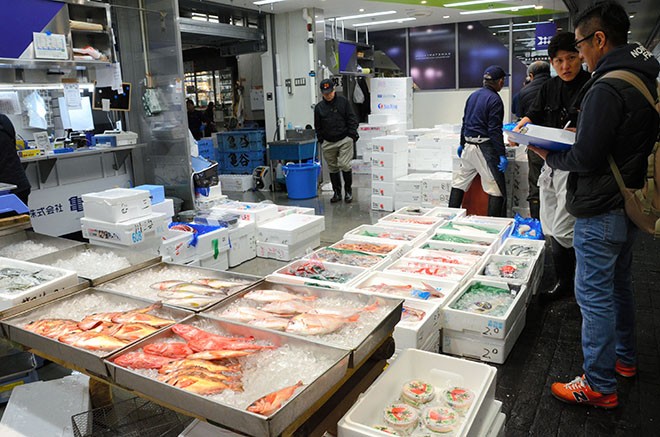 In what even some government officials admit is a retaliatory move, the health ministry will tighten screening of seafood imports from South Korea starting in June.

Ministry officials, in announcing the new measure, said it was aimed at preventing food poisoning during the summer. However, some in the prime minister's office admitted the measure was to hit back for South Korea's continued ban on imports of Japanese seafood harvested in waters in eastern Japan.

Seoul has raised concerns about the safety of such seafood in the wake of the 2011 triple meltdown at the Fukushima No. 1 nuclear power plant.

Chief Cabinet Secretary Yoshihide Suga said the latest measure was intended to protect the public's health and was not meant as a retaliatory measure.

The percentage of that seafood to be inspected at quarantine stations will be raised from 20 percent to 40 percent of reported imports for flounder and from 10 percent to 20 percent for the other items.

Except for sea urchin roe, most of the other seafood items covered by the new measure come mainly from South Korea.

While the tougher measures for flounder will continue until the end of March, the steps for the other seafood items will at first be implemented for about a month.

A health ministry official explained that last year cases of food poisoning caused by the parasite kudoa septempunctata and the bacteria vibrio parahaemolyticus were found. The parasite and bacteria were found in imported flounder and sea urchin roe.

The three other types of shellfish are refrigerated when shipped much like sea urchin roe so ministry officials judged there was also the risk of those shellfish being contaminated with vibrio parahaemolyticus.

Food poisoning from the parasite and bacteria can lead to vomiting and diarrhea, but normally the symptoms are not severe.

Ministry officials said if levels of the parasite and bacteria are found beyond established standards, all produce shipped out from the same farm where the fish was raised and the same plant the other seafood was processed would be stopped at the quarantine station until the seafood passed inspection.

That would lead to a decline in the freshness of the seafood and would make it more difficult to import those items to Japan.

According to health ministry officials, about 9,000 tons of flounder sold annually in Japan is raised domestically with about 2,000 tons coming from South Korea.

The ministry official said imports would be allowed to continue as long as no problems emerged at the quarantine station.

An official with the South Korean Foreign Ministry only said necessary measures would be considered after carefully observing the developments that emerge from the tougher inspection.

Lawmakers from the ruling Liberal Democratic Party had called for tougher retaliatory measures against South Korea after a World Trade Organization panel upheld Seoul's ban on Japanese seafood imports because of the Fukushima nuclear disaster.

The timing of the latest measure is somewhat unusual because normally tougher quarantine inspections are announced after products are found to have exceeded safety standards.

So far, there have been no new cases of imported flounder from South Korea found with unacceptable levels of parasites or bacteria.

(This article was compiled from reports by Akiyoshi Abe, Hirobumi Ohinata, Ryutaro Abe and Hajimu Takeda in Seoul.)