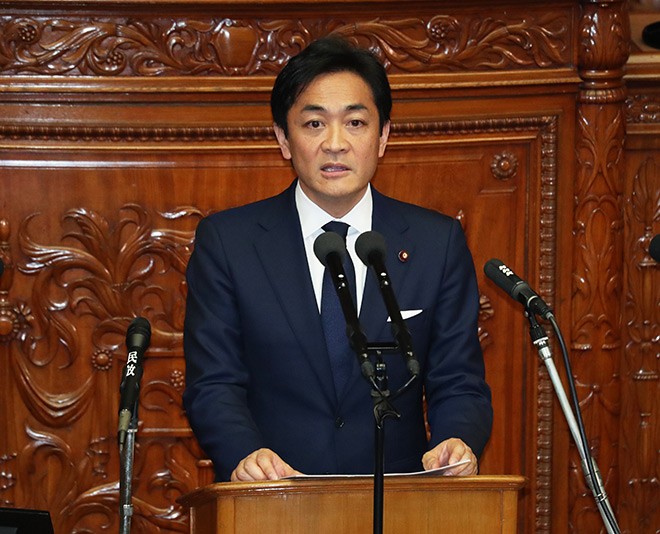 Yuichiro Tamaki, head of the Democratic Party for the People, during the Lower House plenary session on Jan. 22 (Takeshi Iwashita)

An opposition party leader advocating the choice of separate surnames among married couples said a female ruling party lawmaker heckled him by saying that people who want that policy don’t have to get married.

Yuichiro Tamaki, head of the Democratic Party for the People, said the jeers at the Diet session on Jan. 22 showed that the Liberal Democratic Party is not serious about addressing Japan’s falling birthrate, which Prime Minister Shinzo Abe has described as a “national crisis.”

“I realized that the birthrate has not stopped dropping since we left the issue in the hands of the LDP,” Tamaki told reporters.

At the Jan. 22 plenary session of the Lower House, Tamaki pushed for legal changes that would allow women to keep their family names upon marriage.

He said that a young man had told him that he wanted to marry his girlfriend but could not because she did not want to lose her family name.

The LDP lawmaker then blurted out that marriage is unnecessary for such people.

Tamaki quickly responded: “I think that increasing the number and the rate of marriages would counter the falling birthrate, which Japan must overcome.”

He later told reporters about the jeer: “The words came from a female lawmaker in an LDP seat.”

Tamaki also noted that when Abe dissolved the Lower House in 2017, he said the issue of the low birthrate and aging population was among Japan’s “national crises.”

Although Tamaki did not identify the heckler, opposition parties asked the LDP on Jan. 23 to confirm if the words came from Mio Sugita, a Lower House member of the party, at the chamber’s Steering Committee.

Sugita, who had come under heavy criticism in 2018 for asserting that same-sex couples are “unproductive,” did not respond to reporters’ questions on Jan. 23.

A lawsuit was filed over forcing married couples to share one surname, with the plaintiffs arguing that the policy violates the constitutional guarantee of “equality of all under the law.”

The Tokyo District Court last year dismissed the lawsuit, saying the issue should be taken up in the Diet, not the judicial system.