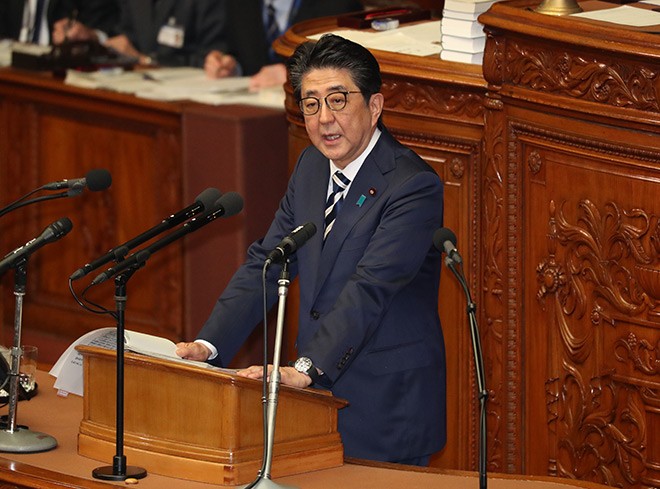 Prime Minister Shinzo Abe rejected opposition parties’ demands that he review a Maritime Self-Defense Force dispatch to the Middle East, rethink casino-related legislation and conduct an investigation into himself over taxpayer-financed parties.

The prime minister on Jan. 22 answered questions in the Diet for first time since the Dec. 2 Upper House plenary session, and he offered no compromises to the opposition bloc despite global developments and growing scandals surrounding his administration.

At the Lower House question session among party representatives, Yukio Edano, head of the main opposition Constitutional Democratic Party of Japan, demanded a probe into the missing list of invitees to last year’s cherry blossom viewing party hosted by the prime minister in Tokyo’s Shinjuku district.

Abe refused, citing, among other things, the possibility of data leaks.

The opposition bloc is pressing for a thorough investigation into invitees to the sakura parties.

Opposition lawmakers say that Abe wasted taxpayer money by using the parties to wine and dine his supporters, including those who traveled all the way from his home constituency in Yamaguchi Prefecture.

They also said the Abe administration has gone to extraordinary lengths to conceal the names of those who attended the events.

The government had insisted that the Cabinet Office, which manages data on the lists of invitees, had discarded all relevant documents after the retention period expired.

However, Chief Cabinet Secretary Yoshihide Suga on Jan. 21 reversed that stance and said some documents related to the annual cherry blossom viewing events from fiscal 2011 to 2013 had been discovered.

Citing Suga’s announcement, Edano said there is a “high” likelihood that the 2019 list may still remain even if it is not in the official format.

He called on Abe to check the disposal record for electronic data concerning last year’s list and to disclose the findings.

But Abe repeated the government’s position that the 2019 list has been destroyed.

He also said: “The disposal records are vital data that can be used to detect unauthorized access and fraudulent manipulation by a malicious third party. If the government reveals its content, it might allow for unauthorized access.”

After Abe’s previous questioning period in the Diet, a lawmaker of the ruling Liberal Democratic Party was arrested on Dec. 25 on suspicion of taking bribes from a Chinese company that had planned to operate a casino in Japan.

Other arrests have been made, and additional lawmakers have been linked to payments from the same Chinese company.

The scandal has also further hurt the image of casinos in Japan, according to various opinion polls, and led in part to the opposition bloc’s bill to rescind legislation that legalizes gambling in the nation.

When asked about the effects of the bribery scandal, Abe said it is “extremely regrettable,” but he emphasized the importance of pushing through with the projects to “enable Japan to become a tourism powerhouse.”

The government has pitched integrated resort projects, including casinos, as a key measure for economic growth.

Abe was also questioned about the Cabinet’s approval on Dec. 27 to dispatch an MSDF destroyer and patrol aircraft for a study and research mission to ensure safety in waterways in the Middle East based on the defense ministry establishment law.

Yuichiro Tamaki, head of the Democratic Party for the People, asked Abe if the SDF’s possible discharge of weapons in the area would constitute the use of force prohibited under the Constitution.

In response, Abe said it would not violate the Constitution and dismissed skeptics’ call for new legislation to justify the SDF dispatch.

After the Cabinet’s approval of the dispatch, tensions between the United States and Iran escalated over a U.S. drone strike that killed a top Iranian commander in Iraq.

When asked about the dangers the SDF may be exposed to in the Middle East assignment, Abe said, “My understanding is that countries in the area will recognize Japan-related vessels and will not engage in illegal infringement activities” that require a response from the SDF.