Families: Only Abe-Kim summit will solve issue of abductions 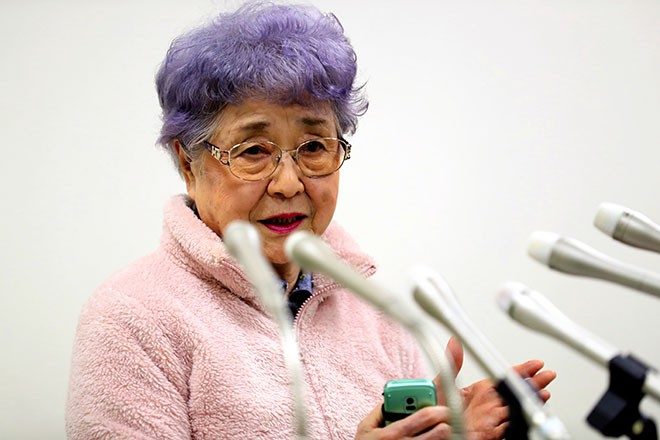 Sakie Yokota, whose daughter Megumi was abducted at age 13 in 1977, speaks in Kawasaki on Feb. 28 about the results of the U.S.-North Korea summit in Hanoi that failed to reach an agreement. (Wataru Sekita)

The Japanese government said Trump raised the abduction issue in his negotiations with the North Korean leader at their Hanoi summit, which ended on Feb. 28.

The summit failed to produce a deal on denuclearizing the reclusive state or make progress in the return of kidnapped Japanese citizens.

Shigeo Iizuka, 80, head of the Association of the Families of Victims Kidnapped by North Korea, said with regret, “I think that the circumstances will change from now on and clues to the resolution (of the abduction issue) will become invisible again."

“We can’t tell at all whether U.S. President Donald Trump appealed to North Korean leader Kim Jong Un about the abduction issue and what the atmosphere was,” said Iizuka, who lives in Ageo, Saitama Prefecture.

Fumiyo Saito, 73, elder sister of Kaoru Matsuki, who was abducted at age 26 in 1980, said, “I think that (the resolution of the abduction issue) will fade away again, and I wonder how many years we must wait to reach a resolution.

“I think that the United States and North Korea didn’t talk in detail (about the abductions). After all, the abduction issue will not end unless the Japanese government negotiates directly (with North Korea),” the Kumamoto Prefecture resident added.

“Prime Minister Shinzo Abe should propose to (Kim Jong Un) that they negotiate directly,” said Arimoto, who lives in Kobe.

But not all families of abductees saw the summit as a failure.

Yokota, a resident of Kawasaki, added, “(Negotiations) will not go smoothly from the start. Families (of abductees) have made an effort to be patient during hardships. What we can do from now on is just pray.”

Kaoru Hasuike, 61, who was abducted by the North in 1978 and returned to Japan in 2002, released a comment, which read, "To obtain authentic denuclearization and make progress to resolve the abduction issue, it's better (that no agreement was made at the summit) than to have reached one where the United States made inappropriate concessions.

“It was lucky that the abduction issue was raised (in the summit),” Hasuike, who now lives in Kashiwazaki, Niigata Prefecture, added.