Abe refuses to budge on Henoko, despite massive ‘No’ vote

Hundreds of demonstrators voice their opposition to constructing a U.S. military base in the Henoko district of Nago, Okinawa Prefecture, during a protest held March 1 in front of the prime minister's official residence in Tokyo. (Video footage by Wataru Sekita) 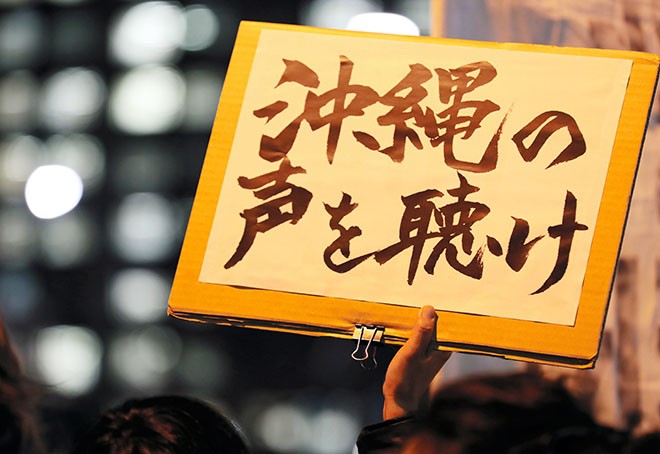 A protester in front of the prime minister's office on March 1 holds up a sign that says, "Listen to the voice of Okinawa." (Wataru Sekita)

Prime Minister Shinzo Abe remains unwavering in his determination to forge ahead with plans to build a new U.S. air base in Okinawa Prefecture despite a massive "No" vote in a recent referendum on the issue.

His intransigence is sharply at odds with his repeated pledges to "stand by" the Okinawan people, reflect "seriously" on the outcome of the Feb. 24 referendum and work to alleviate the burden on the southernmost prefecture, which hosts the vast majority of U.S. military facilities in Japan.

Abe reiterated that there is no going back on moves to relocate a U.S. military base to the Henoko district of Nago during March 1 talks in Tokyo with Okinawa Governor Denny Tamaki. He stated that it remains the only viable solution.

Tamaki met with Abe at his office in the aftermath of the referendum in which more than 70 percent of eligible voters expressed their opposition to moves to relocate the U.S. Marine Corps Air Station in Ginowan to the Henoko district.

In calling on Abe to call a halt to the Futenma relocation, Tamaki said, "The prefectural referendum focused on the Henoko land reclamation work and there is an extremely important significance to the first clear display of the will of the Okinawa people asking for a cancellation of the relocation."

But Abe was unmoved, stating that the construction project would continue and noting that Futenma has often been described as "the most dangerous military base in the world."

The prime minister said the government could not simply ignore that dangerous situation.

During their 20-minute meeting, Tamaki also proposed that the Special Action Committee on Okinawa (SACO) be amended so that the Okinawa prefectural government can participate in proceedings to assess whether the decision on the Futenma relocation was appropriate.

A SACO meeting involving Japanese and U.S. government officials in 1996 led to the release of the final report that has been used as the basis for relocating Futenma to the Henoko district.

Abe touched upon the fact that more than two decades has passed since the agreement reached on the Futenma relocation as part of an overall plan to reduce the military base burden on Okinawa. He said no further delay was acceptable.

Tamaki met with reporters after the meeting and said the prime minister was open to further dialogue with him. However, he said Abe did not give a clear response to the proposal for a three-way forum involving officials of the Japanese, U.S. and Okinawa governments to assess the relocation plan.

Hundreds of protesters gathered in front of the prime minister's office in the afternoon of March 1 hoisting signs that said "Don't bury democracy" and "Don't murder the ocean" while voicing their opposition to the Henoko move.

A 49-year-old woman from Tokyo said she opposed the land reclamation work as she had frequently found comfort in those waters.

She said Japanese living outside of Okinawa should also reflect seriously on the base issue as it directly affects them, too.

(Ryuichi Yamashita contributed to this article.)