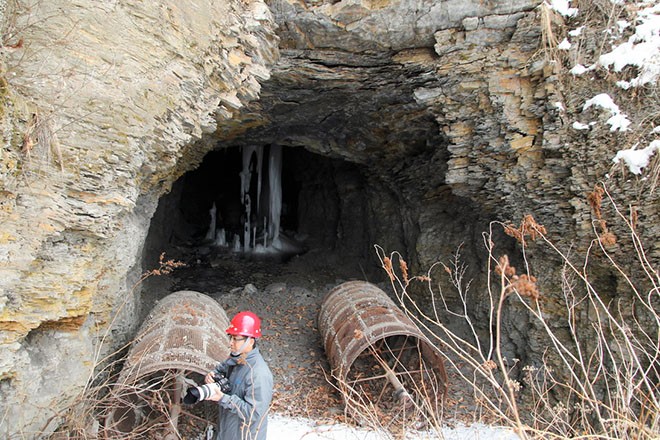 A recent discovery of an underground tunnel in China may prove that the Imperial Japanese Army and Manchukuo were building a massive fortress complex in the closing days of World War II to fight to the end.

The remains of a structure under construction have been discovered by a Japanese researcher at a site in northeastern China known as Manchuria at the time where Manchukuo (1932-1945), the Japanese puppet state, existed.

They are believed to be part of the covert project, known as Hikari construction.

The discovery was made by Hisaya Okazaki, representative of the Okayama-based nonprofit Japanese Center of Researching Kotou Fortress, when he visited China last spring at the invitation of Chinese researchers.

Okazaki, 56, who studies military facilities that the Imperial Japanese Army constructed on mainland China before and during the war, found the tunnel in a mountainous area of Tonghua in Jilin province. The site, in the area called Dongbiandao during the war, is about 50 kilometers from the border with what is now North Korea.

“If our research progresses, it could shine light on many aspects of the covert operation that had been under way just before Japan’s surrender after it has remained a mystery for decades,” Okazaki said.

The tunnel, which has withstood collapse, measures several tens of meters long. It branches off at some locations, apparently to secure more floor space, and concrete was used at some areas. There were traces of drilling involving dynamite at one end of the tunnel.

There also were remains of an entrance for supplies and a water storage facility near the tunnel.

Researchers concluded that the tunnel originated from the wartime era based on local authorities’ assertion that no underground facilities were constructed after the end of the war.

According to Okazaki and other researchers, the tunnel apparently formed part of the Hikari construction plan.

The plan called for resisting to the bitter end by building an industrial complex in the Dongbiandao area, which was rich with iron ore and coal, after the Manchurian Iron & Steel Works at Anshan suffered damage in aerial bombings. Anshan was west of Tonghua. The company was established in April 1944 by integrating some steel plants in Manchukuo.

Toshiro Matsumoto, professor emeritus of economic history at Okayama University, praised the discovery of the remants.

“The discovery is groundbreaking because it showed that the project of Hikari construction drawn up right before Japan’s defeat was actually implemented although little had been known about the project,” said Matsumoto, who studies the history of the steel industry in northeastern China.

He noted that the steel plant in Anshan was a huge facility, accounting for 20 percent of the overall pig iron output by imperial Japan and Manchukuo combined.

“The idea of relocating the facility underground is nothing short of ridiculous when we look back on it now, but that the existence of the project being corroborated by the recent discovery provides an invaluable insight into that time,” he said.

Many aspects of the project have yet to be uncovered due to a lack of relevant documents.

But Okazaki’s searches at public facilities in Japan after his research trip to China have turned up some documents related to the project.

The document was compiled in 1951 by the then agency in charge of repatriations of Japanese from overseas after the war, which was part of the Ministry of Health, Labor and Welfare.

A map that showed streets, steel and other facilities included buildings that were marked “hikari.”

Okazaki’s study showed that the location of Manchurian Iron & Steel Works' facility and the tunnel were identical.