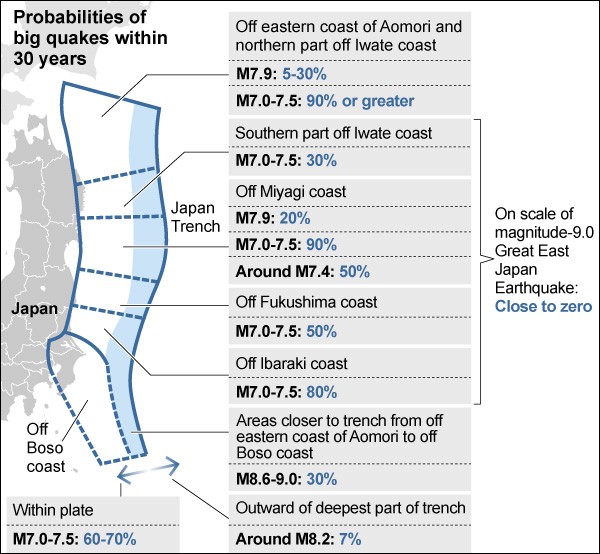 The government’s Headquarters for Earthquake Research Promotion on Feb. 26 warned that a powerful earthquake could occur within 30 years along the Japan Trench.

The Japan Trench stretches to the east of Honshu from the northernmost prefecture of Aomori all the way south to off the Boso coast of Chiba Prefecture. The magnitude-9.0 Great East Japan Earthquake occurred in the area along the trench.

We should not delude ourselves into thinking with only the passing of eight years since the March 11, 2011, disaster, there will be no large quake in the region for the time being.

In many of the trenches and troughs around Japan, tectonic plates (massive slabs) collide, with an oceanic plate sliding beneath a continental plate. Ocean trench earthquakes are caused by the abrupt release of accumulated stress in such plate boundaries and surrounding areas.

In making long-term earthquake forecasts, the quake research panel analyzes data about past earthquakes to estimate the probabilities and scale of earthquakes that could erupt in the future.

The panel has also regularly made and updated forecasts about earthquakes that could take place in areas around such high-risk regions as the Nankai Trough off the Pacific coast of western Japan, the Sagami Trough off the Kanto region around Tokyo and the Chishima Trench, which stretches from areas off the eastern coast of Hokkaido to off southern parts of Russia’s Kamchatka Peninsula.

The last time similar probabilities for a quake along the Japan Trench were released was in November 2011.

The new assessment was based on subsequent seismic activity, crust movements and other new data.

The panel said the probability of another magnitude-9.0 temblor like the Great East Japan Earthquake striking the region within 30 years was "close to zero."

But it warned that there was a 90-percent or 80-percent probability of a magnitude-7.0 scale earthquake hitting some areas in the region.

A magnitude-7.0 quake generally does not create the kind of violent trembling of the earth or towering tsunami that is often caused by a magnitude-8.0 or 9.0 temblor.

But in 1978, a magnitude-7.4 quake off Miyagi Prefecture caused more than two dozen deaths from collapsing concrete block walls and other reasons.

A fresh review should be made of the measures to mitigate the damage from earthquakes in place to check whether there are risks that have been overlooked.

The government classifies the probabilities of earthquakes that could occur in trenches or on active faults into four grades including “highly likely” and “slightly likely.”

Different sets of classification criteria are used for the two different types of quakes.

The grades of probability for both types are intended as easy-to-understand indicators of risks and reference information to help authorities with their decisions concerning policy priorities.

But estimates of the probabilities of earthquakes should not be regarded as highly reliable, in the first place.

Due to the inevitable limits to predictions concerning such natural phenomena, the panel’s long-term quake forecasts should be taken only as rough estimates.

In announcing its latest forecasts concerning quakes occurring along the Japan Trench, the panel warned that no past records of a mega-quake should not be interpreted to mean that there will be no such event in the future.

We need to remind ourselves afresh of the basic fact that it is impossible to make accurate forecasts of the location and timing of an earthquake.

The Japanese archipelago sits on the collision of several tectonic plates and is crisscrossed with active faults.

A major earthquake can occur anytime, anywhere in Japan.

We need to take this grim reality to heart and make steady efforts to prepare ourselves for the next Big One.