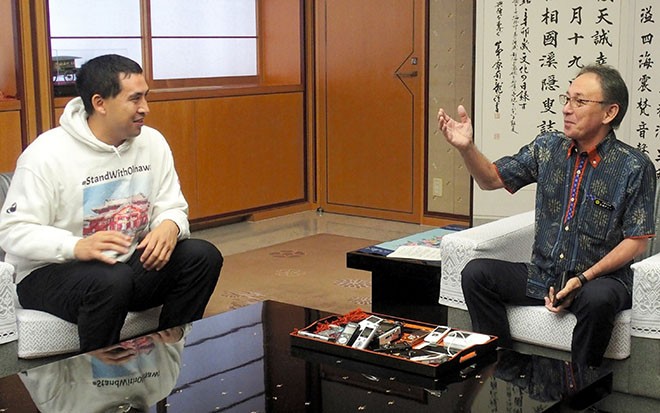 Robert Kajiwara, left, who started the petition campaign about a new U.S. military base, meets with Okinawa Governor Denny Tamaki at the Okinawa prefectural government office on March 5. (Ryuichi Yamashita)

NAHA--Activists have mounted a second online petition campaign to put pressure on the Trump administration to halt land reclamation work in Okinawa Prefecture for a new U.S. military base.

An earlier petition started by Robert Kajiwara, a Hawaii-based fourth-generation Japanese-American musician, gathered more than 200,000 signatures and was posted on the "We the People" section of the White House website.

The 32-year-old Kajiwara, who has roots in Okinawa, met with Okinawa Governor Denny Tamaki at the prefectural government office on March 5 to confirm they would work closely together to keep the base issue alive.

Kajiwara told Tamaki he decided to stage a second campaign in light of the massive "No" vote in a Feb. 24 referendum in Okinawa on the land reclamation work in the Henoko district of Nago to relocate the U.S. Marine Corps Air Station Futenma in Ginowan.

The second petition kicked off Feb. 27, three days after the referendum, under the title of “Save the democracy and coral reef of Okinawa.” As of March 5, more than 10,000 people had signed.

Celebrities like Brian May, guitarist of the British rock group Queen, and Rola, a fashion model and TV personality in Japan, joined the first petition that started Dec. 8. It called for a stop of the landfill work until the referendum could be held.

The "We the people" section, set up under President Barack Obama, allows individuals to start petitions seeking federal government action on certain issues. If a petition gains 100,000 signatures in 30 days, the federal government is supposed to consider the issue and release an official response. It doesn't guarantee any change in official policy, however.

Kajiwara said there had been no official response to the first petition.

He told Tamaki that he wants to devote his efforts to halting the land reclamation work and wants to work closely with the governor.

Tamaki expressed his appreciation for Kajiwara's continuing efforts to assist Okinawa, saying, "We have to protect the dignity of democracy.”

The new petition states in part:

"Japan is destroying a coral reef filled with hundreds of rare and endangered species, including the Okinawa dugong, in order to build a new U.S. military base.

"A lot of the coral are 600 to 700 years old and cannot be found anywhere else in the world. Many species will go extinct if the construction continues.

"Japan has been withholding information from the U.S. in order to cover up serious design flaws, as well as human rights violations against indigenous Okinawans, who overwhelmingly voted against the base in a historic referendum."