VOX POPULI: Miniature model of pre-tsunami town brings it back to life 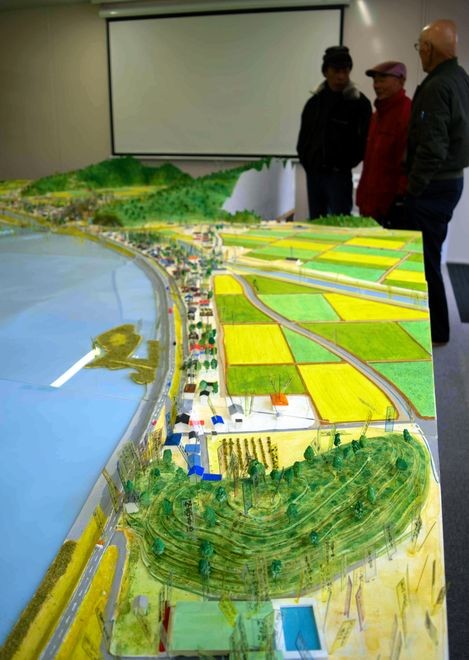 The diorama of the Okawa district of Ishinomaki, Miyagi Prefecture, shows what the community was like prior to the March 11, 2011, Great East Japan Earthquake. (Asahi Shimbun file photo)

In the Okawa district of Ishinomaki, Miyagi Prefecture, the banks of the brimming Kitakami River are lined with colorful homes in red, blue and other colors, their charm enhanced by flower beds and roadside trees.

A reconstructed, 1/500-scale model of this district is currently on display. The diorama is much bigger than I expected.

Severely damaged by the tsunami of March 2011, four of Okawa's villages were designated as "disaster hazard zones" unfit for habitation.

Ryosuke Abe, 71, a displaced former resident and one of the people who came up with the idea of creating this diorama, lost two granddaughters to the tsunami.

"I wanted something tangible by which to remember my ancestral community," he said.

A prototype model was made by Kobe University students and others, and the locals added details and made numerous amendments to ensure accuracy.

"This alley here was much wider than this," someone would point out. "I believe there were shops around here," another would chime in.

The project relied entirely on their memories.

The work took more than three years to complete, and the participants found themselves enjoying it more than they could have imagined.

"After the disaster, we were constantly being ordered by authorities to do this and that--like where we should go to live, what applications we should file and so on, ad nauseam," explained Mikio Otsuki, 76, president of the Okawa Reconstruction Council.

"But working together with fellow citizens on this project enabled me to do my own thing for the first time in quite a while," he beamed.

A just-published book, titled "Okawa Chiku Furusato no Kioku" (Memories of Okawa district, our hometown), contains an extensive collection of comments made by the locals while they worked together on the model-building project.

One person is quoted as saying, "I made a floral crown with cherry petals here." Another said: "I saw the actor Toshiyuki Nishida during a film shoot."

Such simple, mundane exchanges vividly evoke the peaceful days before the 2011 catastrophe.

Ishinomaki's Okawa Elementary School lost 84 pupils and teachers. For this, the district has been presented by the media as a site of heart-rending tragedy.

But for the locals, it always was, and still is, none other than the "center stage" of their lives, filled with memories of laughter and joy.

And the "humdrum everyday life" that has taken root, crossing generational gaps, is still there.