2011 tsunami proved to be a 'lifesaver' for one Iwate resident 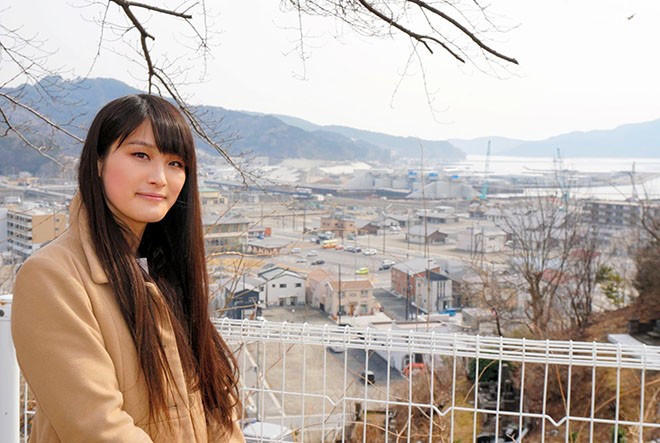 On March 11, 2011, Nyao evacuated to this elevated area when massive tsunami generated by the Great East Japan Earthquake demolished her hometown. (Hajime Watanabe)

MORIOKA--Were it not for the 2011 earthquake and tsunami disaster, one Iwate Prefecture resident might never have resolved a simmering inner conflict over sexual identity.

The 27-year-old, who now identifies herself as Nyao on online social networking sites, said that the towering tsunami generated by the magnitude-9.0 Great East Japan Earthquake offered a chance of a new life in a single stroke.

By that, she meant the tsunami destroyed her home, precious belongings, and tragically even took the life of her grandmother.

"If it wasn't for the natural disaster, I would not be what I am now," she said.

After reaching puberty, Nyao took on more masculine features as her voice grew deeper and she grew taller. But because she felt more attracted to men rather than women, Nyao began referring to herself back then as "Ore," the informal pronoun often used by men in talking about themselves, as one way to overcome her feminine side.

She was unable to confide to her parents about her conflict over sexual identity and left Iwate to attend a university in the greater Tokyo metropolitan area.

But on March 11, 2011, Nyao was back in her hometown and perusing books in a local library when disaster struck at 2:46 p.m. She and other residents scrambled to higher ground and watched helplessly as the town was destroyed by a huge wall of water.

Nyao, along with her parents and a woman she had begun dating just a few days earlier, ended up in an evacuation center.

At that time, Nyao felt that as the oldest son she had a responsibility to get married, sire children and put her parents at ease.

But she was wracked by other worries, aghast at the thought of introducing the girl friend as her intended and having to spend the rest of her life living as a man.

Those concerns were only exacerbated when fellow evacuees told Nyao to protect those she loved because, "You are a man."

The tsunami claimed Nyao's grandmother and swept away the family home. But Nyao also harbored feelings other than fear, anger and despondency.

The family home was the repository of childhood photos and even the uniform worn to senior high school while Nyao struggled with her sexual identity and kept it secret.

For that reason, Nyao also felt the tsunami had washed away everything that had helped bottle up her true self.

Confronted by the psychological stress of having lived through the disaster, coupled with her grueling existence as an evacuee, Nyao reached the breaking point in terms of continuing to live as a man.

Eighteen months after the disaster, Nyao broke up with the woman she had been seeing and told her parents the truth about her sexual identity.

"I was finally able to make the decision to face society" Nyao said. "The tsunami helped me to choose another path in life."

After graduating from university, Nyao began growing her hair and took to wearing women's clothes. She was diagnosed with gender identity disorder and two years ago underwent sex reassignment surgery.

Nyao returned to Iwate and applied for a part-time job at a restaurant chain outlet. She wrote honestly about herself on her resume and expected to be passed over. But the interviewer said, "There appear to be no problems" and she landed the job.

"I might have been overly afraid," Nyao said. "The world was a lot kinder than I expected."

She now has a part-time clerical job at a hospital. She also attends gatherings of sexual minorities with her mother.

"I want to live with my partner and raise children. I want to lead that kind of life."