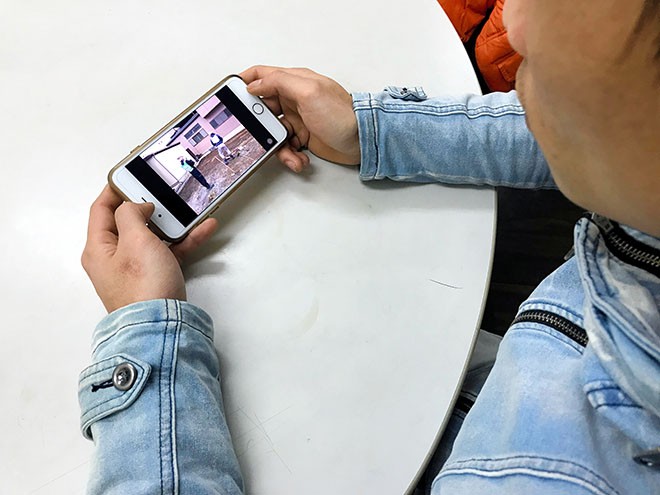 THAI BINH, Vietnam--Nguyen Duc Canh’s concerns about working in a deserted northeastern Japanese town were compounded after a boss handed him an unexpected “bonus.”

“What’s this for?” the young Vietnamese trainee asked.

Canh asked again, “What kind of danger is here?”

The boss then snapped, “If you don’t like it, leave.”

Much later, Canh became convinced that he had unwittingly engaged in work to decontaminate areas riddled with radioactive substances released in the March 2011 accident at the Fukushima No. 1 nuclear power plant.

After blowing the whistle on the work, Canh, 25, became known as the “decontamination trainee.”

Canh’s experience shed light on the unethical activities conducted under the government’s Technical Intern Training Program. Many employers have withheld wages from trainees and forced them to work long hours doing menial tasks.

In the case of Canh, who sought skills in construction machinery and civil engineering work in Japan, he was not told about the hazardous nature of the work.

He and other workers were instructed to wear masks upon entering the workplace in Fukushima Prefecture in autumn 2016. He had an ominous feeling as he scooped up fallen leaves with a shovel.

Soon after graduating from high school in Vietnam, Canh learned about the opportunity to go to Japan on the trainee program.

“I thought I could make money,” he recalled. “I was also interested in Japan.”

He was promised work at a construction company in the Iwate prefectural capital of Morioka. A representative of a supervisory organization that takes in foreign technical trainees explained to Canh: “The work is easy. Anybody can do it.”

But after arriving in Japan in September 2015, he was first dispatched to radiation-hit Koriyama in Fukushima Prefecture to remove contaminated soil and clean street gutters.

After five months of this work, he was taken to Kamaishi, Iwate Prefecture, to dismantle residential houses.

In September 2016, Canh was again dispatched to Fukushima Prefecture, specifically Kawamata, part of which was designated an evacuation zone at the time. There, he engaged in building demolition work under the direct control of the central government.

It was in Kawamata where his boss gave Canh the choice of either continuing to work amid the unspecified danger or returning to Vietnam.

He decided to stay to pay back his debt despite his suspicions about the nature of the work.

To come to Japan, Canh took out a bank loan of more than 1 million yen ($9,025) for a 1.6-million-yen payment to a recruitment company, known as a “sender” organization, in Vietnam.

His debt equaled several years of the average annual salary in Vietnam.

In Japan, Canh was paid about 120,000 yen a month after-tax. Technical trainees are also forbidden from freely changing their places of employment.

As the year 2017 unfolded, Canh’s work moved him from Iitate in Fukushima Prefecture to Higashine in Yamagata Prefecture and then to Sendai. He was sent to Kawamata again in March and worked for two months demolishing buildings.

He then met a journalist who told him, “Decontamination work is dangerous.”

Canh feared he had been exposed to high levels of radiation and ran away from the company’s dormitory in November. He stayed at a shelter operated by supporters of foreign technical trainees in Koriyama.

Twelve other trainees from Vietnam, men and women, who had also fled from their employers were staying at the two-story shelter house.

Canh slept in the daytime and watched soccer games on TV at night.

As the days went by, he grew desperate. When he arrived at the shelter, he had less than a year left in the three-year limit for the trainee program.

Encouraged by supporters, he talked about the experience of cleaning contaminated articles in Fukushima Prefecture without being informed of the risks.

“I am very worried what will happen to my body,” he said. He bitterly regretted coming to Japan.

The accounts of Canh and other trainees had an impact.

The Justice Ministry asked other supervisory organizations that take in foreign trainees to find another company for Canh.

In August, a major construction company that specializes in building tunnels welcomed the trainee.

He started working on construction of a tunnel on a new road connecting Miyako on Iwate Prefecture’s Pacific coast to Morioka.

He shared a dormitory with 20 or so other employees about a five-minute drive from the construction site. Eight of them, including Canh, were Vietnamese trainees.

“It was difficult for me to learn the technical Japanese needed for the job,” Canh said.

He worked there for only two months until his training program period ended in late September.

But Canh said he has fond memories of his last job.

He hobnobbed with Japanese workers in their 40s and 50s who lived in the same quarters. Canh was about the same age of their sons, and they had an animated conversation about Canh’s girlfriend at the time who was also a trainee from Vietnam.

“He didn’t know everything but worked very hard for us,” his boss said of Canh. “I would very much like to have him work at our company again.”

In January this year, Canh was back at his home outside Hanoi with his parents.

“I had a terrible experience, but I also met kind people. I think Japan is a good country,” he said.

He said that he and his former boss would look forward to a reunion.

He did not have a full-time job in Vietnam, saying he wanted to return to Japan soon to work again.

Canh renovated his parents’ house and added a second floor with the money he earned in Japan. His current plan is to work in Japan for several years, then return to Vietnam, get married and live on the upper floor with his own family.

His parents did not object to their son’s plan to work in Japan again, saying, “We like to have him living with us, but we also want to support what he wants to do.”

Dang Thi Lan, Canh’s 53-year-old mother, said, “I heard from my relative who travels overseas frequently that the streets are clean and companies are steady in Japan.”

Canh never told his parents about his decontamination work in Japan.

“I don’t want them to worry about me,” he said.

But his 56-year-old father, Nguyen Xuan Ba, may have learned about it from others.

“I heard that the first company he worked for was not good. I am in great fear that he may become ill,” the father murmured in Canh’s absence.

While many employers appreciate and pay attention to the trainees’ daily lives, unethical activities continue to be reported.

Many trainees are under pressure to pay back loans, and they struggle to fight for their labor rights because of their limited Japanese.

“Many presidents of the companies that accept technical trainees have naturally pleasant personalities,” said Ippei Torii, chairman of the board of a nonprofit organization called Solidarity Network with Migrants Japan.

“But they become rude over time, and when they start to think that the trainees are fearful of being forced to return home, they feel like they can do anything to them,” Torii explained. “Then they commit sexual harassment and power harassment.”

Torii points out that the government’s job training program for foreigners has a “structural problem of slave labor that makes people crooked.”