Lisa’s In and Around Tokyo: Science Museum--Old-school type facility without being fancy 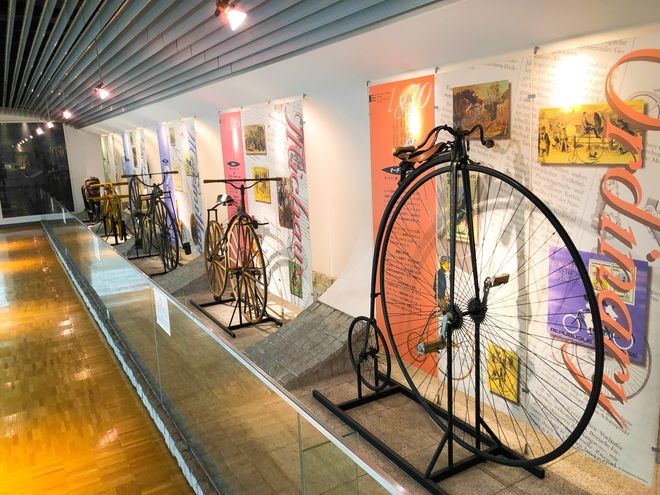 A large collection of old bicycles is chronologically arranged on the second floor of the Science Museum. (Photo by Lisa Vogt)

The Science Museum at Kitanomaru Park in Chiyoda Ward is in a prime location near the Imperial Palace.

When I first saw it, I thought the museum looked like a Jewish mausoleum, although I confess I don’t remember ever having seen or been inside one. The building is covered with thousands of precast concrete panels in the shape of the Star of David. My first thought was that in today’s politically charged world, the unintended symbolism of this decorative motif of the two-triangle stars might lead to baseless speculation and discomfort for some.

I went inside expecting to see the country’s latest-and-greatest, cutting-edge science. Japan, with its status as one of the world’s most technically advanced nations, would surely wow its visitors with a high-caliber museum of science.

Or so I thought. I suppose if I had gone with no expectations, it would not have been as disquieting.

A quarter of a century ago when Makiko Tanaka, a politician known not to shy away from words and who once headed the Science and Technology Agency, visited the museum, she likened it to “sweet curry rice” and ordered a revamp.

There are four floors of exhibits, and visitors can learn hands-on about all kinds of science: electricity, metals, motors, medicines and more. I enjoyed the “History of the Bicycle” exhibition with antique bicycles on display and learning about the function of each part of a dissected bike.

When I visited on a late weekday afternoon, there were only a handful of visitors, and it felt like I had the whole museum to myself. There were many large, empty rooms with chairs, so I imagine the museum is a destination for elementary school field trips.

With the Olympics and Paralympics coming up, perhaps the English name for the museum should be changed. In Japanese, it’s Kagaku Gijutsukan, and the “gijutsu” (technology) is missing in the English. With the museum seemingly geared toward teens, how about something along the lines of the National Children’s Museum of Science, Technology and Engineering?

The museum is worth a visit if you like old-school museums with few bells and whistles, and if you keep in mind that it opened in 1964, the year of the first Tokyo Olympics. Then it might even be endearing.

This article by Lisa Vogt, a Washington-born and Tokyo-based photographer, originally appeared in the Feb. 17 issue of Asahi Weekly. It is part of the series "Lisa’s In and Around Tokyo," which depicts the capital and its surroundings through the perspective of the author, a professor at Meiji University.