A family of rock ptarmigans with young birds takes a dust bath by the side of a mountain path. (Yukio Kondo) 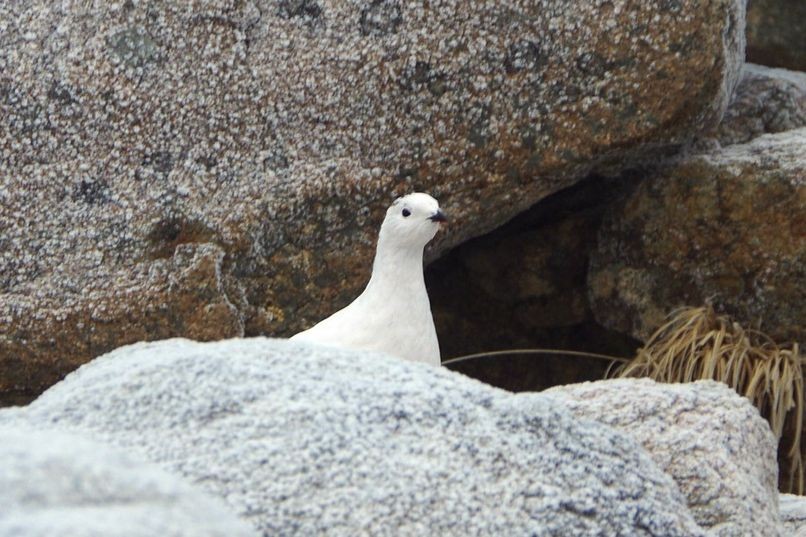 A rock ptarmigan is seen on Nov. 4, 2018, at the summit of Nakadake peak of Mount Kiso-Komagatake in the Central Japan Alps. (Provided by climber Masahiro Nakata)

A female bird that a climber found on Mount Kiso-Komagatake, a 2,956-meter peak in the Central Japan Alps, is the key to reviving rock ptarmigans there, researchers say.

Before she was spotted last summer, the species hadn't been seen in the Nagano Prefecture mountain range since 1969. They were believed to be extinct locally.

The bird, which has been designated a “special natural monument” by the government, presents a golden opportunity to try and revive the species in the area, Environment Ministry officials said.

It's their hope that she can hatch eggs taken from rock ptarmigans in other areas where the species still exists.

“The survival of the female bird in the Central Japan Alps is the key to everything else,” said Hiroshi Nakamura, a Shinshu University professor emeritus, an internationally known authority on rock ptarmigans.

Up to six fertile eggs will be collected from nests on Mount Norikuradake, a 3,026-meter peak in the Northern Japan Alps, between mid-May and early June in a program officials said is a first in Japan.

The eggs will be taken to the Central Japan Alps and placed in the female's nest, replacing unfertilized ones she has laid. Ministry officials are optimistic she'll mistake them for her own.

“I hope she hatches them and it leads to fulfilling the eventual goal of reviving the Central Japan Alps rock ptarmigan colony,” Nakamura said.

An Environment Ministry on-site study determined she arrived in the Central Japan Alps from either nearby Mount Norikuradake or another peak in the Northern Japan Alps.

The study indicated the bird had been in her new habitat for at least a year and a half when she was found.

If any eggs hatch, a follow-up study will be held through October, when the chicks will become independent of their mother. That will happen simultaneously with research to find out why the local colony died out and a study on the habitat, including on the possible presence of predators.

Rock ptarmigan populations have been shrinking in different areas, partly due to foxes, martens and other predators. There were about 3,000 birds of the species when a survey was taken in the 1980s, but there are now less than 2,000.